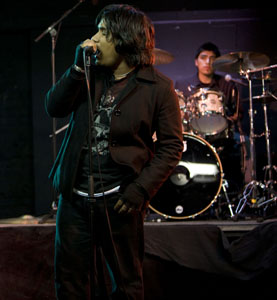 Sí TV is a national cable show that targets English-speaking Hispanics all across the United States. With over 20 shows on their roster, I was most captivated by their show “Jammin,” which is in its second season. It’s a reality series about the trials that bands go through to make their dreams come true.

First, the show went across the country and picked local bands from various cities to showcase them nationally and let the public pick their favorites. The winners would take home prizes including $10,000, a Gibson guitar sponsorship, coverage in People en Español and the opportunity to perform at the People en Español concert.

“One week we were rehearsing in a garage, and the next were playing on a nationally televised show,” says Jorge Hernandez from a local Lynwood/Compton band called Cuna De Lobos.

The show provides opportunities for the bands to meet and receive advice from artists they grew up admiring.

“Los Amigos Invisibles came to see us and were positive towards our music,” Jorge relays excitedly.

Another solid band from Southern California, Mystery Hangup chimes in.

“We were doing our sound check, and we got really nervous when Dave Navarro walked in,” says lead singer Cat.

Sí TV is doing much more than simply producing a show. The Latino community in Los Angeles has so many talented bands, but very few outlets to promote themselves.

When asked how he feels about what Sí TV is doing for his band, Hernandez responds, “We want to represent rock from the hood and this was a good experience.” I

f you’re interested in checking out what the Spanglish bands are doing in this country, log onto www.sitv.com.