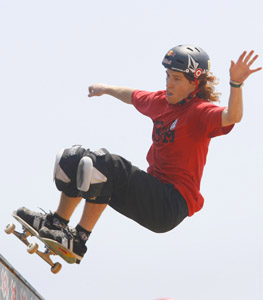 In the early and mid-’90s, a major movement began taking place in American sports. While people sat at home, angry at the baseball strike and bored by the lack of top tier talent (read: Michael Jordan) in the NBA, distinct and radically new sports began capitalizing on the youth and their need for change in their parents’ sports world.

Though mixed martial arts and all it’s ensuing legal battles were at the forefront of this movement, extreme or action sports like skateboarding, BMX, motocross and surfing took advantage of adolescents addicted to the thrill of seeing something they had never witnessed before.

When the “Extreme Games” first debuted in the summer of 1995, teenagers everywhere were glued to their TVs as ESPN dared to air skateboarders and BMX racers pulling dangerous tricks and stunts while asking their audience not to try the same. In the process, they helped to breed the next generation of sports fans and athletes.

The last 13 years have seen the now “X Games” evolve from the unknown, to the obscure, and finally to the culturally relevant. With athletes like Shaun White and Travis Pastrana becoming household names, the X Games have quickly become one of the premiere sporting events being showcased around the world each year.

This year’s X Games 14 will kick off at the Staples Center in Downtown Los Angeles and the Home Depot Center in Carson on July 31, running through Aug. 3. ESPN also plans to air 14 hours of coverage on all of their affiliates as well as on ESPN360.com.

While all fan favorites from the original X Games will be on display, as well as the recent addition of Rally Car racing, the X Games have always been about improving the experience for both the fan and the athlete. This year, the X Games will add a transition-focused discipline for both skateboarding and BMX called SuperPark.

SuperPark will blend a variety of different terrains and obstacles into a single seamless course. The idea is to highlight the all-around abilities of some of the best skaters and BMX riders in the world.

“We are constantly striving to present new sports and disciplines at the X Games that accurately reflect the state of action sports and participants,” states Chris Stiepock, X Games General Manager in a press release on EXPN.com. “The proliferation of public skate parks has fostered new athletes who excel on large park features, leading us to develop the SuperPark discipline.”

Though SuperPark will likely be one of the more popular events of the week, this year marks the first time that the X Games will not have a stand alone vert ramp.

Also being added to the field this year will be BMX Street, which will follow much of the same template as the popular skateboard street competition, and women’s Motocross, which many of the female competitors, including 17- year-old professional rider Ashley Fiolek, see as an excellent chance to further the demographic for women’s action sports.

Adds Fiolek on her sponsor Oakley’s Web site, “This is a huge step forward in women’s professional motocross. I feel honored to be asked to participate in the X Games and I am looking forward to a great race.”

Though some have feared that the over-saturation of the X Games biannual schedule had begun to damage the sport, the X Games and their sponsors hope that the evolution of different sports, as well as the athletes continuing to challenge themselves and the boundaries of their sports, will keep people coming back for many years. While action sports have yet to find their place amongst the “Big Four,” it’s clear that there still exists an audience and a voice that enjoys seeing what people can do with a big hill and a small piece of wood.