Sailing the Dream: A local 16-year-old hopes to break the world record. 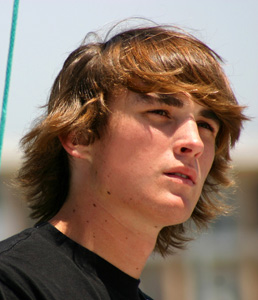 He traded in his football pads for a life vest; his driver’s license for a boating license; and his junior year of a high school for an adventure of a lifetime. Zac Sunderland, a Thousand Oaks teenager, departed Marina del Rey on June 14 hoping to become the youngest sailor to solo-circumnavigate the globe.

He was not yet old enough to drive a car alone when 16-year-old Sunderland waved goodbye to a 200-plus crowd of supporters as he set sail and faced the open waters.

“Football season was over, and I was looking for something else to do,” Sunderland says. “I’ve always had this goal to go out and do something amazing on the ocean. That’s my background, so I decided to try to make it happen.”

Sunderland comes from a sailing family. His father is a British-trained shipwright and manages yachts. The family, which includes seven children, spent three years cruising through Mexico when Zac was only 10. He was home schooled throughout his childhood, and the ocean was his playground.

Sunderland purchased his boat, the Intrepid, a 35-footer with $6,500 he had saved since he was little. But with the help of his family and some sponsors, he’s spent more rigging it with sophisticated equipment, including a state-of-the-art navigation system, two computers, a high frequency radio, a satellite phone and a stereo system.

“The hardest thing was saying goodbye to my friends and family whom I’ve seen everyday of my life,” Sunderland says. “I don’t even think I’ve been alone for a whole day, let alone an entire year.”

But with Sunderland’s boat suped up with the latest-technology, he says he hasn’t felt too lonely. He befriended a father and son at sea and set up a single side band radio net with them so they could regularly check in on each other.

Sunderland has also been talking to his family over the phone and corresponding with friends and media through e-mail. And yes, he’s bringing his homework with him.

Sunderland had a slow-start learning the unpredictable ways of the water and developing a routine for himself. He spends many sleepless nights plotting routes, studying weather charts and cleaning the Intrepid while waves ruthlessly crash against his boat. And booby birds, which Sunderland calls “the dumbest birds known to mankind,” have recently been giving him a run for his money.

But after his first month alone, Sunderland made his first stop in Honolulu on July 11. Greeted by family, press and plenty of fans, he docked his boat and spent a few days recuperating and restocking the Intrepid.

Before he got too comfortable, Sunderland kissed his parents goodbye and continued his journey. He plans to make over a dozen stops as he makes his way around the world.

Sunderland intends to write a book while he’s on his trip and record footage for a potential documentary upon his return. He’s far-sighted and mature enough to acknowledge this adventure could set him up for a career in sailing. In fact, he has already met with recruits from Harvard and Yale who are eager for Sunderland to break the record and eventually head off to college.

Sunderland will be at sea as long as 18 months. He will study on board and finish his junior year of high school all while circling the globe. All he has to do now is stay on course for the next 40,000 miles to complete the journey. And to return as the youngest person ever to do so, he needs to get back by January 2010.

“If there’s anything I want to teach people it’s that you can’t just dream your whole life,” Sunderland says. “You just have to go for it – press hard and see if you can make it happen.”