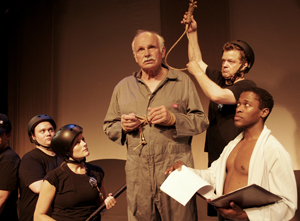 The Open Fist Theatre Company presents a non-intimidating interpretation of Shakespeare’s comedy of mistaken identity. Set in the Venice Beach-like town of Ephesus circa pre-hippie 1964, this comedy of errors falls short in terms of handling the language, but is strong on visual slapstick.

Two sets of twins, the Dromios and the Antipholuses of Syracuse and Ephesus respectively, create havoc regarding a necklace, a sum of money and who is whose husband. Director Ron West breaks with tradition by casting two actors in each role instead of having one actor play both Dromios and Antipholuses, and it’s very effective in clarifying the action.

West’s ensemble staging gets pretty wild towards the end of this piece that comes in at 90 minutes with no intermission.