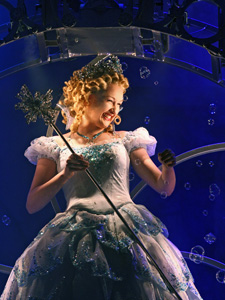 Perhaps it’s the contextual relevance of “Wicked” that’s making it the latest worldwide phenomenon in musical theater. All too familiar is the Swift Boat-esque OZ-ian smear campaign carried out against the “Wicked” Witch of the West in this reinvention of the telling of Oz and its inhabitants. Frighteningly close to home is the story of mediocre minds (the Wizard, Madame Morrible) manipulating their way into positions of great power, distorting and ignoring truth left and right in order to create a topsy-turvy world of discrimination, injustice and propaganda that benefits the few by misleading the many.

Or perhaps the play owes its success to its subtle and effective use of the universal themes of tolerance, acceptance and friendship.

Or ... maybe audiences connect so well with “Wicked” because in its simplest form it’s a story about a controversial bond between two girls, one born green and one born blonde.

“I think that’s a beautiful part of the show, the exploration of friendship and what that means in our lives,” says Erin Mackey, who, to Los Angeles’ great benefit, recently transplanted from the Chicago “Wicked” company to play Glinda the Good on sunnier shores.

Mackey points out that the friendship that develops between Elphaba, who becomes the “Wicked” Witch of the West, and Galinda, who becomes Glinda the Good Witch of the North, is more than just a clever opposing of conflicting personalities.

“She [Glinda] has never had anybody tell her that she’s doing things wrong. She has always been adored, then all of a sudden this woman [Elphaba] comes, and she realizes that she does do things wrong and that she needs to own up to them. I think by the end she’s learned from Elphaba what it actually is to be good; that it’s not just passing like you’re good and smiling and being funny and being loved. It’s about searching for justice and those things that are incredibly important to society, humankind, and in Oz, animalkind.”