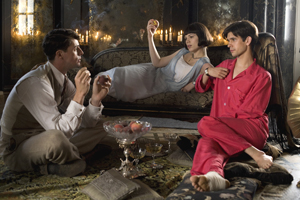 Nowadays, it’s not uncommon for a young person of limited means to find him or herself tangled up in the exciting world of those more fortunate. However, this wasn’t always the case in jolly old England.

It is the battle of the classes and elitist social divisions that inspired writer Evelyn Waugh’s poignant study of love in Brideshead Revisited. Brideshead stars Matthew Goode (Match Point) as Charles Ryder. Charles is a young Oxford student who befriends the troubled homosexual brother of a beautiful young socialite named Julia.

This dashing young man’s life is forever transformed by his lifelong love for Julia and his friendship with Sebastian, her sibling. But instead of being accepted into their dysfunctional fold, Charles spends years under the watchful and discriminating eye of the pair’s mother, Lady Marchmain (played by the incomparable Emma Thompson). The inner-workings of these complex relationships are set against the backdrop of WWII, as well as the Catholic Church. It would be highly important for filmmakers to find actors who could appear contemporary to modern-day audiences, while being able to display – with ease – the breadth of emotion needed to carry out Waugh’s work.

“I think for the part of Charles, you need to be a good back-footed and front-footed player, and Matthew does that extremely well,” remarks producer Kevin Loader. “He’s passionate when he needs to be passionate, playful when he has to be playful and slightly mysterious when he has to be more opaque, and that’s hard to do.” Ben Wishaw, who plays Sebastian, is not only a favorite of English audiences, but also of his cast mates and those behind the movie’s production.

“I’d seen him in Perfume, and I knew he was a brilliant actor. Sebastian is a very difficult part because you can easily overplay the feminine elements of his character, and make him too ‘camp.’ But Ben is a superb actor and has a very gentle, beguiling quality which shone out early on.” Wishaw extends his admiration to his counterpart’s sister, Julia (played by Hayley Atwell): “I’ve just completely fallen in love with Hayley,” he says. “She has such amazing style and grace, and she’s also got an enormous soul and sensitivity, which I think is a rare and wonderful thing. She’s also very sexy, as a person and in her performance as Julia. I think Hayley and Matthew’s part of the story will be really moving.” For Goode, he has fallen on the radar of nerds everywhere with the impending release of comic-to-screen adaptation of The Watchmen. However, a large portion of his career thus far has existed in the world of the complex English drama. With Waugh’s intense prose anchoring him, he commits to Charles with true abandon, adding sensitivity to his character’s bizarre love triangle.

“When I first read the script, I found it quite hard to love Charles,” confesses Goode. “I think he can be quite selfish and weak at times. But then you look at his upbringing. When you see he had no love from his father and no motherly influence, it gives you an understanding of this guy. He’s very messed up.” While that may be true of his character, Goode appears the picture of actor perfection. He’s tall and striking and every bit as charming in person as the men he plays in movies – with one surprising difference: the guy is incredibly funny. Goode is aware that he is not quite a household name now:

“I’m 30 and not really in the limelight. No one really knows who I am back home.” But after his breakthrough performance of Charles Ryder, that’s bound to change.