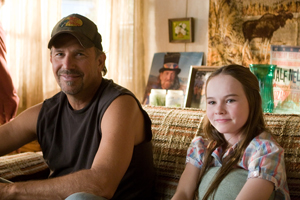 Swing Vote is a film about an election in a hotly contested election year, one that is already historic since, as one of the film’s stars, George Lopez, explains: “We’re either going to get darker or a lot lighter in this next election. The change that’s out there, the fact that every vote does count and the re-ignition of people’s hope for change couldn’t land in a better place than in Swing Vote.”

The film centers around one average man named Bud (Kevin Costner) who becomes the final decision maker in a presidential election where one ballot makes all the difference.

The film’s director, Joshua Michael Stern, says, “We thought that if [the 2000] election could come down to a district in Florida, some 500 votes, we could create a believable election that came down to one.”

Many people buck the responsibility of voting, thinking that a single voice can’t be heard in a crowd, a feeling Costner understands.

“When you do the math, you think ‘I don’t matter.’ But that’s when we’re thinking selfishly. When you start to think of yourself as a whole, as part of the fabric of America, that’s when you realize your vote does matter.”

It was a realization he came to several years ago following Florida’s hanging chad debacle.

“I saw a billboard about eight years ago and it struck me,” Costner recalls. “It said, ‘92 million people in last year’s election made a difference. They didn’t vote.’ It was so profound it was devastating.”

Kelsey Grammer who stars as President Boone says, “I’ve never had the chronic low self-esteem that America seems to hold onto, I think everybody’s vote counts, and I always have. That moment in the voting booth is still a sacred one.”

In a surprise turn, Dennis Hopper plays his opponent, Donald Greenleaf (Is that an Easy Rider reference?). When asked how he felt about playing someone so far removed from his Blue Velvet roots, he laughs, “I was miscast,” and then explains, “I just tried to keep my hair combed and be as stiff as possible.”

But Swing Vote is about more than who will occupy the Oval Office; it’s about a family struggling to survive.

“In the end,” Costner says, “it’s about a man and his fifth grader with politics as the backdrop.”

Stern adds, “This movie isn’t about politics, it’s about citizens.”

And in order to appeal to the populace, Stern knew they “needed an actor with a general sense of sympathy that sells it.”

That actor was undoubtedly Kevin Costner.

“Kevin is very good at playing the anti-hero and he’s very American. He drinks cold milk with all of his meals,” reveals Stern.

But he also needed to be able to be the movie’s villain.

Bud’s guiding light is his daughter played by preternaturally talented newcomer, 12-year old Madeline Carroll. The role required a tremendous amount of emotional depth and intelligence from the young performer, and Carroll more than rises to the occasion.

“The reason she’s as good as she is,” explains Costner, “is because she has awareness, and she realized she had the opportunity to score with this role and [she did].”

Madeline is quick to compliment her co-star and mentor: “I’ve learned so much from him. It’s been a blessing.”

But the question must be asked; is America tired of election talk? Will this film be met with voter fatigue or box office returns? That uncertainty excites Costner.

“That’s what I like, when it’s not a sure thing. If I was in the Sure Thing Business, I would’ve done Dances with Wolves 3 or The Bodyguard 3.”