The X-Files: I Want to Believe: Do You Still Lack Trust, or Are You A Believer? 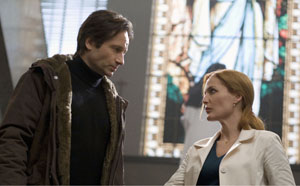 As the creators of The X-Files launch into a heartfelt explanation behind their latest offering, the actor known as Fox Mulder storms into the press room and jokingly asks, “I have a question: What was it like working with David Duchovny?” The whole room roars with laughter. It is in this moment that one realizes the dynamic duo is back. In The X-Files: I Want to Believe, the late 1990s cynicism found in the statement, “Trust no one” has been replaced with a newly optimistic mantra. Fox Mulder (Duchovny) and Dana Scully (Gillian Anderson) have returned a little older, a bit wiser and still chasing down things that go “bump” in the night. Only this time around, that spooky goblin is tied to a suspicious priest and the Catholic Church. Scottish character actor Billy Connolly gives a daring performance as Father Joseph Crissman. He’s a fallen member of the clergy who succumbed to the lure of sex scandal.

Living in a halfway house with other sex offenders doesn’t exactly make him an endearing character. However, Crissman finds himself on the right side of the law when he claims to see visions of several women who have been abducted by a violent attacker.

The FBI utilizes him for its search. But the real question is: Is he truly psychic, or just knowledgeable about the crimes because of where and how he lives? About his complex new role, Connolly offers up some of his infamous humor to describe the honor of working with creator Chris Carter: “When [Chris] told me about Father Joe, I knew I must do the part and thus horrify my family and friends.” In addition to Connolly, there are some other familiar faces that help carve out this unusual story. Actress Amanda Peet and rapper Xzibit have joined the cast, playing skeptical FBI agents that snuff out Mulder and Scully for their sleuthing services.

Xzibit, a longtime fan of the series, says, “Being a part of the lineage of this great phenomenon is incredible.” The rapper-turned-ride-pimper-turned actor immersed himself fully in his role. Although he admits that his onscreen counterpart was a bit “stodgy.”

“He doesn’t take no for an answer,” says Xzibit. “And he has no time for Mulder’s strange ideas. Because if Agent Drummy can’t see it, feel it, touch it or kill it, then he doesn’t believe it.” As for Mulder and Scully, the pair has evolved into a much more emotionally demonstrative couple since the last film. Gone is the rampant sexual tension between the two. That has now been reserved for Duchovny’s onscreen exchanges with Peet.

“[My character] is an FBI agent who may – or may not – begin to feel a connection with Mulder,” says Peet. Duchovny acknowledges his counterpart’s growth as well: “Mulder and Scully are meant for each other, but there’s always an obstacle that threatens their relationship. This movie is very much about that obstacle.” As for Anderson, she enjoyed the reunion with her old cohorts, but also enjoyed the new twist on their well-visited formula.

“Playing Scully was less about always referring to the script and more about going back to the history and memory of the character. So getting back into character was much more work than I had anticipated.” As for Duchovny, he reveled in the return to the frosty, snow-laden streets of Vancouver to reprise his role. Although the actor is a star on the hit Showtime series “Californication,” he was still itching to return home – to Mulder.

The X-Files: I Want to Believe is currently in theaters.