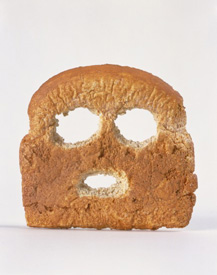 Early in the film UHF, the cult-classic from Weird Al Yankovic, there's a scene where Al parodies Close Encounters of the Third Kind by sculpting a mountain out of mashed potatoes. Who knew that Mr. Weird would go on to inspire a generation of artists - and not just geeks who find "Weenie in a Bottle" the funniest thing since the Jerky Boys?

(Before I segue into the sequitur of all of this, a quick story of how I made someone cry at a Weird Al concert. They had a "Weird Al Look-a-like Contest" that, disturbingly, over 100 people entered. I don't mind obsessed fans, but I do mind hubris. So, the winner comes up to me and boasts, "Ahem, I'm the winner of the Weird Al Look-a-like Contest!" I respond, "Wow, I never realized it was possible to simultaneously be such a big winner and a loser.")

The point of the story is that UCLA has a new sculpture exhibit called THING that, also like Weird Al, seems ingenious in its simplicity - any material, including food, can be the fodder of sculpture. My favorite is a slice of break with three bites taken out of it formed into a face.

Other ingredients include coconut fiber formed into a dog on a floor mat, one of those summer camp God's eyes, a deflated baloon made of silver and another fav - Betty Ford, which someone seemingly created upon first being admitted to her clinic, as it resembles a pantyhose caterpillar and is molded from lycra, fur, wood, pearls and pins.

While the sculptures are reason enough to attend, the titles are the glaze on the clay. Some examples include "eros bruises thanatos" and the delicious "The smoke bomb (exists behind your eyes and you only see it when you die and then it releases all phylogenetic memories)." Creative bon appetit.