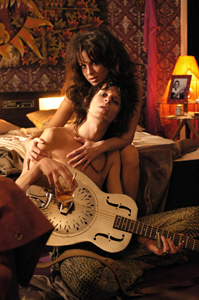 Uschi Obermaier was a beautiful young woman living in a stifling house in Munich until the day her mom called her a slut. Following her wanderlust aspirations, the sexually precocious hot thing fled to Germany’s notorious Kommune 1, where she learned free love and anti-establishment ideals.

Next, the nude cover model hooked up with the Rolling Stones, namely Keith Richards. But limos, concerts, sex and drugs began to bore her, too, so she joined an international traveler in a luxury van for a 10-year escapade.

Obermaier’s life was a wild ride that you’ll love being on, but you’ll also be thankful to get off. Her motivations often seem empty and selfish, and in the end, she learns that pursuing freedom sometimes has a price: loneliness.