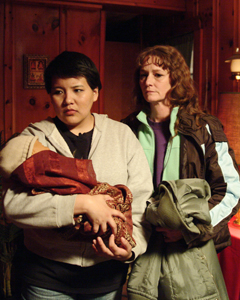 Ray Eddy (Melissa Leo) is not unlike the majority of downtrodden heroines that populate independent film. A mother of two, her husband is a compulsive gambler who leaves town with the money they were supposed to use on their dream home.

Now desperate and broke, Ray is recruited by Lila, a Mohawk smuggler, to transport illegal Chinese and Pakistani immigrants across the frozen St. Lawrence River and into America. The money is easy and if all goes well, Ray will have her doublewide trailer by Christmas.

Should I be the compassionate reviewer and empathize with Ray and her trying situation? It would be shameful not to.

But after viewing Frozen River I was hesitant to feel any degree of emotion aside from disgust. In a scene involving a Pakistani couple and their week-old infant, Ray chooses to wallow in self-pity rather than display compassion for someone in a similar set of circumstances.

When Ray finally does become enlightened, we’re too indifferent to care.