The Mummy: Tomb of the Dragon Emperor: (Universal) 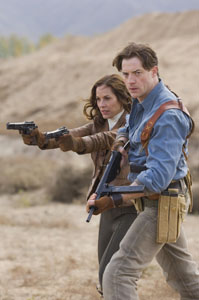 Why change a successful formula? This latest version of The Mummy series is the cinematic equivalent of New Coke.

Brendan Fraser is still our hero, but they switched the heroine. Maria Bello steps into the role once portrayed by Rachel Weisz. They both deliver great performances considering the weak script, but their son has done a soap opera style rapid aging and is portrayed by Luke Ford, an actor that looks more like he should be their peer than their offspring.

Jet Li’s skills are completely wasted in his role as the bad guy, and the entire production lacks the thrill and fun of the previous two installments. There is some fun, but the story is weak and the few special effects just aren’t that special.

The Mummy – Tomb of the Dragon Emperor releases in theaters Aug. 1.