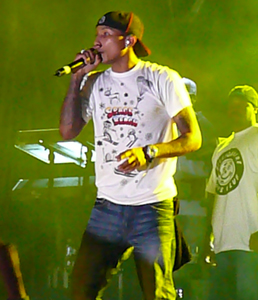 The line-up for HARD was pretty impressive: MSTRKRFT, Steve Aoki, Bloody Beetroots, Spank Rock. It was held on two stages at the Shrine, and the partying lasted past 4 a.m.

But the most exciting part of the night happened when N.E.R.D. took the stage. Pharrell, Chad and Shay got on around 1 a.m. to give the over-excited crowd exactly what they wanted: some good dance music.

Pharrell had the crowd following his every command. He said get low, we got low. He said wave your arms, so we waved them. Pharrell is as good as a frontman as you can ask for.

Toward the end of the set about a dozen girls rushed the stage, half of them gathered around Pharrell, dry humping him, trying to rip his clothes off. I don’t know how N.E.R.D. continue to flawlessly blur the lines between genres and bridge the gap between obscurity and popularity, but they get my vote for best new band of the Millennium. Oh yeah ... and MSTRKRFT was good, too.