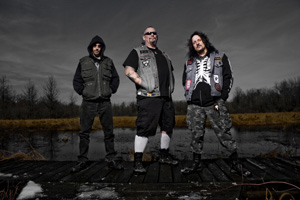 For years he was known as Beefcake the Mighty, gargantuan leader of the immortal blood-spewing, traveling uproar known as GWAR. Now, he is more commonly known as T, guitarist and singer of the black swamp speed metal trio Mobile Death Camp.

“I left GWAR, and now it’s full bore!” declares T. “I’ve wanted to play thrash/speed since my last thrash band way back in ’89. So after trying out about eight or nine drummers, Killer B and I found Cracker. With him on board we put out a demo together and decided to make a real run at it.”

MDC is a vicious throwback to the true days of metal. With influences including Slayer, Black Flag, Stormtroopers of Death and Cannibal Corpse, they’ve just released their first effort, Black Swamp Rising.

“Our tunes are full of heavy riffs, shredding leads and bass backed by some thunderous drumming.” says T. “The lyrics are based on our life experiences, daily observations, TV, dreams, beliefs and non-beliefs. It’s speed and thrash combined to make you shake your groove thing while also vying to be pit boss.”

Black Swamp Rising was recorded and produced at Karma Productions in Richmond, Va. with Corey Smoot and Dave Gibson of Mensrea.

“It was a laid back atmosphere with killer studio equipment,” says T. “Killer B is my rock and the best musician I’ve ever worked with in my career. Cracker is a wisenheimer and a bad ass speed metal drummer, so it went really smoothly.”

“I met Devin in 2005 on the Sounds of the Underground Tour,” explains T. “We [GWAR] asked him at that point if he’d be interested in working on our next album and he agreed. He is an amazing talent and a genuine freak! I mean that in the BEST way possible!”

The Toledo, Ohio based MDC is currently on it’s own headlining tour but recently guest spotted on several larger festival sized shows including the Jägermeister Music Tour with Hatebreed and Type O Negative.

“The crowd response has been awesome,” says T. “Anyone who is not familiar with us can expect a very high output, speed metal onslaught. After the summer we’re hoping for a big tour. Something with Cannibal Corpse or 3 Inches of Blood would be great … anybody out there listening?”