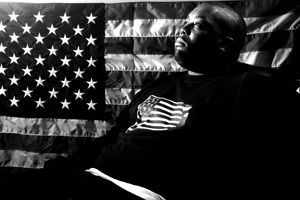 After an early career full of success and heartache, from Grammy Awards to rockin’ tracks with Jay-Z to fall-outs with friends, Killer Mike – the “Mic Killa” – is back on his grind in a real way. At the helm of his label, Grind Time Official, Mike has the freedom to do as he feels creatively not only for himself, but for the new generation of music.

However, with power comes responsibility, and Mike is taking it upon himself to lead as an example. Directing the charge against fakeness in the industry, Killer Mike has released two singles from his new album, I Pledge Allegiance to the Grind II.

“I ain’t really goin’ in on a n***a yet, but I’m definitely letting them know that there’s a line drawn.”

“I don’t fear no man/Not Bush, Not Clinton, Not Osama/Ask ya Uncle Thomas how he choose Master over Obama.”

With the very powerful and controversial street video making its way around the Internet, as well as the recent release of the “Insert Fuck Boy name here” freestyle over Lil’ Wayne’s Bangladesh-produced “A Millie,” the Atlanta representative, West Side to be exact, is leaving no room for the skeptics’ imaginations to roam.

With few major guest appearances, Mike’s powerful wordplay and bangin’ beats that kick the listener in the head from start to finish, I Pledge Allegiance to the Grind II stands as one of the best albums to grace hip-hop in a while. Oh yes, it’s time to take out the trash, folks.

I Pledge Allegiance to the Grind II is currently available. For more information, visit www.myspace.com/grindtimeonline.