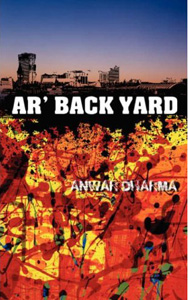 The mind of a teenage boy is no easy place to inhabit, but author Anwar Dharma makes it humorous with his compelling tale of a young lad growing up in one of England’s worst estates. A career criminal who spends his days sniffing glue or smoking “freshly imported skunk weed from Amsterdam,” Chopper realizes from an early age that the world is against him and articulates his scorn for authority at every opportunity.

Dharma’s prose, channeled through Chopper’s voice, is funny, dead on and full of cheekiness. His foolproof comic timing and apt descriptions will have you in stitches. “The potent fumes,” he describes of Chopper’s glue sniffing, “were making their way through my mouth and nose like a pack of hungry wolves.”

With colorful colloquial language and plenty of good ol’ British slang (there’s a glossary in the back), it’s a catchy nihilistic look at life in ’80s Britain as seen through the trials of a teenager.

Ar’ Back Yard is currently available.