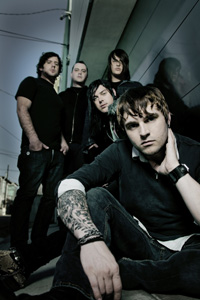 If there were one thing to know about Norma Jean, it’s that they are absolutely brutal in all aspects of how they approach their music – concussively, wrenchingly, destructively, viscerally brutal.

Knowing that, it makes it all the more puzzling that frontman Cory Brandan would describe the writing process for the band’s latest effort, The Anti Mother, with the laid-backness of an intensity-lacking hippie jam session, just with sleeve tattoos and skinny jeans.

As the follow up to 2006’s acclaimed Redeemer, The Anti Mother sees Brandan, guitarists Chris Day and Scottie Henry, drummer Chris Raines and bassist Jake Schultz challenge themselves unlike ever before. But hey, as Brandan says, “The songs just kind of wrote themselves.”

“With Redeemer, we already had whole songs written before we even started the process, while with this record, we kind of built them as we went. We set out to write a heavy record, and we wanted to experiment with so many things that we’re influenced by and that we like,” says Brandan.

“We didn’t pull any punches, we did whatever we wanted and just kind of hoped that something good would come out of it. We were writing up through when songs were being tracked, still writing ideas, adding parts and rearranging things.”

While still the traditional Norma Jean sound in the sense that the Atlanta-bred fivesome are as gritty and raw as ever while still being sonically sweeping and more emotionally evocative than a band with a growly vocalist has any right being, The Anti Mother sees them venturing further into entirely uncharted territory.

“‘Robots 3 Humans 0’ is a song that’s really a huge step for us,” says Brandan of the album track that seems to have caused the most pre-release talk among fans.

“If you take away the vocals, the song is heavy as crap, then when you put the melodic vocals over it, the contrast is really unique. When I hear that song I hear Norma Jean, I don’t hear anything else. We didn’t want to try to make ourselves into something else, it just flowed into that and naturally came out that way.”

Considering how ferociously intimidating Brandan is when he takes the stage, surely a little variance from his otherwise sandpaper-on-cinder-blocks vocal style wouldn’t scare him … right?

“I’d be lying if I said it didn’t, but honestly, there’s so much energy in that song and so much intention behind it, that I think if you really pay attention to what’s going on musically and lyrically, you can feel that vibe,” Brandan says.

Though he was admittedly anxious to see if the more progressive track would meet fan approval, Brandan came to the conclusion that, regardless of what the reaction was, the accomplishment of it was satisfying enough.

Though he hopes his fans will take the sonic leap of faith with him, Brandan also confesses to making it a goal on this album to have the band’s lyrics (The band writes them collectively.) be more accessible to listeners.

“I really wanted to make sure on this album that the lyrics were more understandable and less cryptic,” he says. “I want people to see what’s happening in a song and be able to get something out of it rather than trying to break down every lyric to figure out what we’re talking about. In the past, we’ve gone to a much more poetic level, whereas with this record, we tried to keep it more straightforward to get the point across.”

Though it may come off as less cerebral in its execution, that too was just as rooted in the band’s constant desire for growth.

Though seemingly a minor detail in the story of the band’s direction, maybe it’s a sign that the members of Norma Jean are all walking the same path of musical destruction these days.