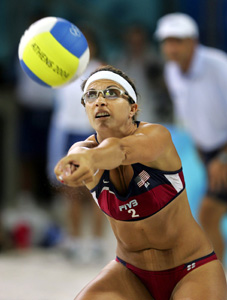 On Aug. 8, the world will turn its attention to China for the 2008 Beijing Games. While the United States has traditionally set the pace in total medals, China may unseat the Americans this year.

The Chinese are fielding the largest team at this year’s Games – 639 athletes. That dwarfs the 407 athletes representing China in 2004.

USC will send 39 past, present and future athletes, while 32 athletes will represent UCLA. With that, here is a look at the 31 of the 33 sports featured during the 16-day Olympic Games.

Led by Coach Kisik Lee, the U.S. Archery Team will look for success at the games in Beijing; the team finished fourth at the Athens Games. The favorite is Korea, who won gold medals in the sport in 2000 and 2004.

Host nation China is a favorite to win this sport; the Chinese have won 22 Olympic medals in badminton. The headliner will be China’s Lin Dan, or “Super Dan,” who is the world’s top-ranked player. He is likely to face competition from Malaysian Lee Chong Wei, the second-ranked player in the world.

The top American representatives are 2004 Olympian and 2005 world champion Howard Bach and Eva Lee. The United States has never medaled in badminton.

The United States won the gold in 2000, yet failed to qualify at the Athens Games. This year’s Olympic Games may be America’s last chance to win gold, as the sport will not be featured in the 2012 London Games.

This year’s team is managed by Davey Johnson. Leading Team USA at the plate will be power-hitting outfielder Matt LaPorta, while San Diego State right-hander Stephen Strasburg will try to dominate on the mound.

With no major leaguers on the roster, Team USA is made up of 14 players playing Triple-A ball, seven in Double-A and one each at Single-A and in college. Local standouts include Michael Steven Hessman (Fountain Valley).

Despite 12 Olympic men’s titles, the USA basketball lost its top spot in international basketball after Argentina claimed gold in 2004 and Spain won the 2006 world championships. Team USA finished with Bronze at Athens; they also finished third at the 2006 worlds.

BEACH VOLLEYBALL Some of the biggest names will represent Team USA at the Beijing Games, including defending gold medalists Misty May-Treanor and Kerri Walsh and bronze medalist Elaine Youngs. Nicole Branagh will team up with Youngs; the duo is ranked fifth among all qualified teams for Beijing.

Canoeing will be marred by the death of two-time Olympic canoe champion György Kolonics. The Hungarian, a four-time Olympian, died due to heart failure during a practice session July 15. He was 36.

The competition will be watered down as multiple cyclists were banned from competition, including 16 players on the Dutch team, for drug violations.

Leading USA diving are standouts Laura Wilkinson and Troy Dumais, who both won their events at Olympic Trials to secure their third trip to the Summer Games. Chris Colwill is one of four American divers competing in two separate events.

Winning six gold medals and two silvers in Athens, China is the early favorite to claim top honors in diving.

Winning a medal in Athens, the American equestrian team will be led by 44-year-old Phillip Dutton, who won gold for Australia in 1996 and 2000. Dutton became an American citizen in 2006, allowing him to ride for Team USA.

Israeli Tomer Or is among the highest ranked foilers in the world since 2003 and will headline fencing activities in Beijing. Also aiming for a top spot in the sport is Qatar, which is looking for its first ever medal.

Team USA is expected to have another outstanding performance on the international stage, both individually and collectively.

Representing the women’s team will be Shawn Johnson, last year’s world all-around champion and Nastia Liukin. Both finished 1-2 at the U.S. Olympic trials in June.

Team USA failed to qualify this year. Highlighting the Beijing Games will be defending team handball champions Croatia, though star Ivan Cupic is out due to injury. Eleven teams will try to unseat them, including former Silver medalists Germany and Bronze medalists Russia.

Rhonda Rousey hopes to be one of the first Americans in recent years to earn a spot on the Judo podium. Winner of a Silver medal at the 2007 World Championships, she is considered the best American competitor in the last 10 years.

A total of 72 participants, 36 men and 36 women, will compete in the event in Beijing that includes shooting, fencing, swimming, equestrian and running.

Representing the United States will be an entire new slate of players, including three-time Olympian Sheila Taormina, who is competing in the pentathlon for the first time at the Summer Games.

On the men’s side, Air Force Captain and top-ranked American Eli Bremer will try to break the American trend of failing to place in the Olympic Games.

A competition that includes elements of ballet, gymnastics, theatrical dance and apparatus manipulation, few countries have been able to dominate as the Russians have. The sport utilizes a rope, hoop, ball, clubs and ribbon during the event.

In Athens, Russians Alina Kabaeva and Irina Tchachina claimed gold and silver, respectively. Ukrainian Anna Bessonova, who won the bronze in 2004, is capable of capturing gold this year. Other standouts include Russians Olga Kapranova and Vera Sessina.

The United States has claimed 68 medals in men’s rowing, including 29 first place Olympic finishes. Team USA will be led by Jason Read, who has been on the national team since 1995.

Team USA claimed gold in the men’s event in 2004, the first time it did so since 1964. Joining Read will be Chris Liwski and Marcus McElhenney.

However, the sport’s rising star is Belarusian Ekaterina Karsten-Khodotovitch, who won three consecutive gold titles from 2005 to 2007. She was also the first Belarusian to ever win a gold medal at the 1996 Atlanta Games.

Another sport where the United States is dominant, Team USA claimed 49 gold medals in shooting. However, Team USA faltered in Athens when American Matt Emmons fired at the wrong target on the final shoot – giving the gold medal to China’s Jia Zhando. Team USA hopes to recover from the blunder and is favored to reclaim gold in Beijing.

U.S. Women is also strong, with six gold medals. However, China will give the women’s team a run for its money; the host nation has 13 total medals in shooting, more than any other country.

With a leg injury to Abby Wambach, the women’s soccer team will struggle to defend its Athens Gold. However, Hawaiian phenom Natasha Kai may step in to fill the void.

On the men’s side, Michael Phelps will seek to break Mark Spitz’s record of seven gold medals at a single games.

Japan has dominated synchronized swimming, winning 11 of the 33 medals awarded in the sport. None of them, however, are gold. Leading in the gold medal count is the United States, with five. Russia has four gold medals.

Leading Team USA in Beijing will be Andrea Nott and Christina Jones of California, who won the duet competition at the Pan American Games. As a team, the United States finished fifth at the 2007 World Championships.

China is expected to win gold in table tennis, with two-time Olympic champion and top-seeded player Zhang Yiningis leading the way in Beijing.

Team USA will be led by two-time defending Olympic welterweight champion Steven Lopez, winner of the last four world titles. On the women’s side is Charlotte Craig of Riverside, Calif., 17, winner of the Bronze medal at the 2007 World Championships.

Tennis at the Beijing Games will be headlined by world No. 1’s Roger Federer and Ana Ivanovic. Federer of Switzerland is attempting to win his first Olympic medal; he was upset at the Athens Games by Czech Tomas Berdych. Defending French Open champion Ivanovic will be making her Olympic debut.

American Andy Roddick will not participate in the Beijing Games.

Representing the United States in the trampoline competition is Chris Estrada and Erin Blanchard. Estrada and Blanchard are the first Americans to compete at the Olympics in trampoline since Jennifer Parilla.

Hunter Kemper finished ninth in this event in 2004, the highest recorded finish for an American in the triathlon. Kemper hopes to place higher at Beijing. Joining him are Andy Potts and Victor Plata.

The women’s team fared better at Athens, where Susan Williams finished with the Bronze despite crashing in the cycling portion. Pending catastrophe in Beijing, the women’s team should have a strong performance this year.

Team USA, which has several returning players from previous games, will feature Tustin-native and Olympics rookie Richard Lambourne. The men’s team finished fourth place in Athens, though each player has international playing experience.

Team USA will be lead by goalkeeper Brandon Brooks, a four-time All-American selection at UCLA. With a team made up of Californians, Team USA should contend for the Gold. Captain Tony Azevedo, a two-time Olympian from Long Beach, will help Brooks on offense.

Serbia’s Aleksandar Sapic is a key player to watch.

Also featured at the Beijing Games are Field Hockey and Sailing.

The Opening Ceremony will air Aug. 8 at 8 p.m. on NBC. For more information, visit www.nbcolympics.com.