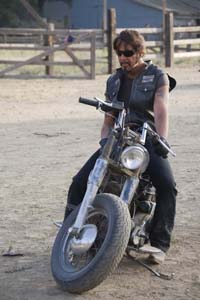 “I got a call from my friend, Laura Cayouette,” Bishop says. “It’s 12 o’clock at night and she says, ‘I’m standing next to Quentin Tarantino, and he’s your biggest fan.’ He gets on the phone and says, ‘I own all your movies, do you want to come up and watch a mint print of The Savage Seven?’”(The Savage Seven is a 1968 biker film Bishop starred in.)

When Quentin Tarantino asks you to watch a movie at his house at midnight, there’s only one answer: a resounding yes! The sudden invitation left Bishop shocked and awed.

“I took acid in the ’60s and I thought, this was the thing they say happens,” Bishops says, still sounding exhilarated. “At the end of the movie, he turns to me and whispers, ‘It is your destiny to star, write and direct a brand new motorcycle movie.’”

With that, Bishop immediately to set to work on the Hell Ride script, which ended up being 400 pages.

“When Larry first came to me, I swear to God, the screenplay was this big,” co-star Michael Madsen says, holding his fingers three inches apart. “It was like a phone book, and I said, ‘You expect me to read this?’ It was mostly descriptions of people and scenes; there wasn’t a lot of dialogue. I couldn’t figure out how in the hell he was gonna make it.”

The answer was, with the help of Tarantino, who championed the project to the Weinsteins, secured funding, made sure the film had the right music and was responsible for the movie’s final cut, adding the requisite “Tarantino-ness,” as Leonor Varela puts it.

Initially Tarantino was planning on acting in the project as well, “but then he decided he didn’t want to be an actor anymore ... at that time,” ribs Madsen. So the part went to Eric Balfour.

Given a tight budget and a short shooting schedule, Bishop was met with supreme commitment by the cast and crew.

“We had a 20 day shoot, and I knew I could do it in 15 days on the first day because everybody really knew their job,” Bishop says with pride.

Though Hell Ride is directed by Bishop, it shares a Tarantino signature of putting the audience in a world that is both familiar and completely foreign at the same time. You can recognize the places, but the people and events are almost unfathomable.

Varela found the intensely overt sexuality to be “a great thing.”

“I think not apologizing for who you are is incredibly sexy,” she says. “Being empowered and sexual and not being ashamed or afraid or feeling guilty for it is a wonderful thing. I think we could all be a bit more like Angelina Jolie. I felt like I had a new pair of balls, and I was earning them at every point. There was a lot of liberation and a lot of joy.”

For the men, the film offered a veritable playground.

“The best thing was riding the motorcycles,” Madsen says with childlike excitement. “Just riding flat out for 30, 40, 50 miles on the open highway behind a camera truck with two 35 millimeter Panavisions. The two days we did all the riding were probably the two greatest days of my whole film career.”