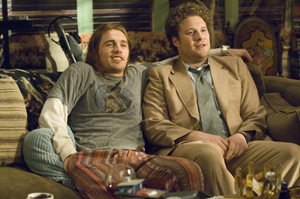 When process server Dale Denton (Rogen) witnesses a murder by a local drug lord (Gary Cole) and a crooked cop (Rosie Perez), he chucks his joint out of his car window and flees to get help from his dealer, Saul (Franco). When Dale and Saul realize that the special “Pineapple Express” weed in the joint can be traced back to them, they embark on a series of hilarious adventures to escape the bad guys.

Franco shines as the stoner with a heart of gold, while Rogen competently delivers as the lazy pothead who is somehow dating a gorgeous high schooler (Amber Heard). The chemistry between Franco and Rogen is undeniable.

Just like in Superbad, the bond between the two main characters is truly the heart of the film more than weed, guns and gross-out sight gags. By the end of the movie, you truly care about Saul, Dale and their friendship. Pineapple Express: a bromance for the ages.

Pineapple Express is currently in theaters.