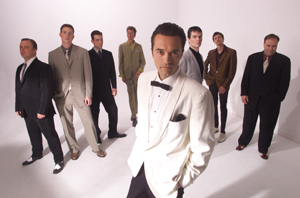 No musician wants to hear the phrase “your prime.”

What interests me about Eugene, Ore.’s Cherry Poppin’ Daddies is not whether they’ll last past their second decade, what they do outside of the band or why they opted to go the DIY route with new record Susquehanna, a nostalgic nod to the albums that embraced third-wave ska and only touched on the slinky swing that made them famous. For what it’s worth, though, they’ve got jobs in bartending and teaching as well as a molecular biology degree among them, and according to frontman Steve Perry, they simply didn’t like their last label much (though guitarist Jason Moss claims they were thrown “to the curb” for lacking a hit in 2000’s Soul Caddy).

What I want to dig into is the bio on their Web site, written by Moss. Here he has snidely referenced how once “the phrase ‘swing scene’ rolled off the critical number of tongues necessary for mass acceptance, Universal subsidiary Mojo got behind an already-available compilation called Zoot Suit Riot: The Swingin’ Hits of...” And likewise, he’s mentioned the failure of Soul Caddy’s “Diamond Light Boogie” to “reach the chart heights of ‘Riot,’ [surprising] no one.”

“I wouldn’t say I’m bitter about the success of Zoot Suit Riot; if anything I’m thankful, but it was also just a strange time to have a hit,” Moss writes. “When it was a hit, the other bands that were popular at the time were Marcy Playground, Fastball. Record labels were just signing whoever had a hit ready to go.”

Like Perry and keyboardist Dustin Lanker, Moss’ only real goal with this band was to make enough money to live, and to have a record that would pay for the next. But past is past. In this decade, Perry and Moss briefly dabbled in what Moss calls “glam rock” (and what I would call “dad rock dressed for Bastille Day”) via side project White Hot Odyssey.

Luckily, the Daddies are now back from an imagined hiatus and touring the record they self-released this spring. They’re bored with the past. But what do they want to talk about?

Perry’s songwriting, for one. On their hesitance to embrace a single genre, Perry draws comparison to the “periods” Picasso is often lumped into – it’s the audience, not the artist, that aims to categorize. Lanker, meanwhile, talks up “the juxtaposition of happy or peppy music and dour lyrics,” a rebellion against the “where’s my cocktail?” approach to swing and ska he deems typical. He and Perry love the idea of twisting a song into a tale of the sad clown – bittersweet, a touch wistful, major chords under violent lyrics.

Moss links this irony to Perry’s affinity for gangster movies and history, noting an old song like “Pink Elephant,” which swung arrogantly, sure, but referenced “prohibition and the underside of [it]” with lines like, “He eats boot black rotted on a piece of white bread.” I’d call out his obsession with sin and sleaze, but Moss says simply that Perry’s got a standard human fascination with crime and darkness.

What the group hates discussing is the origin of their band name (“one of those things … people sitting around drinking…”), and left somewhat quietly is Perry’s leadership role, which Moss likens to that of Bruce Springsteen versus his E Street Band (“there’s a point where Bruce Springsteen has the final say”). So if any neutral words ought to be, they will come from trumpet player Dana Heitman, who reveals that, “I may be the trumpet player, but I really enjoy a good metal band.”

Also, he summarizes, “Boxers. Medium-rare. And as loud as it can be without causing pain.”