Confessions of a Dangerous Mind: (Miramax) 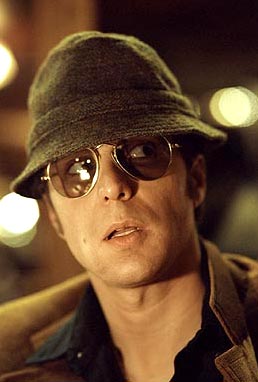 Confessions Of A Dangerous Mind is an Adaptation of Gong Show creator Chuck Barris’ book by none other than Being John Malkovich scribe Charlie Kaufman. In his rehashing, he reveals that Barris’ Human Nature is the same found in us all.

As in all of Kaufman’s work, the transitional membrane between reality and fantasy is smudged to the point of obscurity. The film could aptly be renamed Confessions of a Beautiful Mind, for the schizophrenic whirlwind that was game show host/purported CIA member Chuck Barris’ life——madly taken on by under-appreciated actor Sam Rockwell. Shimmying from tongue-in-cheek satire to frenetic drama, first-time director George Clooney (who also has a small part in the film) navigates the tone surprisingly well.

Though some of the shots call too much attention to their "look how original I am, please don’t gong me!" uniqueness, Clooney manages to toy with the medium more than many established directors. Sets seem to roller-skate around the actors, or a pan takes us over weeks instead of seconds. The indivisibility of content and form (what shots, like Barris, can we take as observed? What must we question?) is usually reserved for established directors, and hardly even premier ones.

Interspersed throughout the film are documentary interviews with celebrities that worked with Barris——among them, Dick Clark——further blurring any conclusion about Barris’ life.

But ambiguity——was he or wasn’t he a CIA agent?——is what screenwriter Kaufman does more profoundly than any other writer typing today. Kaufman’s films never try to prove a thesis, but rather present you with possible answers, allowing you to form your own questions and conclusions on the way home.

This explores the subject of the film rather than, in the case of A Beautiful Mind, trying to form their subject’s life into some sort of moral. Once again, Clooney, Kaufman and Rockwell manage to infuse the film with the same haziness that Barris’ book twisted. However, because Confessions does allude to possible "morals," some additional depth is desired. You’ll leave the theater like you would have left one of Barris’ shows——highly entertained, but not quite sated. Grade: A-