The Zutons: British Band Rocks to Own Beat 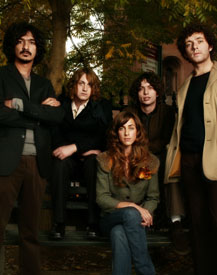 Few bands can match the kinetic stage presence of The Zutons – five Liverpool musicians who seemed incapable of standing still.

"That’s the fun part isn’t it, playing live?" says singer-guitarist Dave McCabe in a thick Liverpudlian accent that’s hard to understand over the trans-Atlantic phone connection. "No one likes doing interviews. When we play live, it seems to make sense. It all comes together, the reasons why we’re in a band."

"It seems when we play it at the gigs people look at you differently for that song because they’ve heard it somewhere before," says McCabe, who has never seen the commercial. "I don’t know what it’s done for us, but I’m pretty sure it’s not a bad thing."

It’s different from the style that the band adapted soon after its formation in 2002. At that time, The Zutons were trying to fit into the psychedelic rock style defined by British buzz band the Coral.

McCabe says that it wasn’t until saxophonist Harding joined the band that an original identity surfaced.

"We just became The Zutons," he says. "When you’ve got a band together, you don’t really plan these things. It took a bit of time for us, like it does with a lot of bands.

"A lot of bands are together for five years before they ever do anything. We just nailed it with Abi and the saxophone. That’s what makes The Zutons; it just fell into place after a while."

In assessing the band’s debut, Rolling Stone also pointed to Harding’s saxophone: "The addition of the horn adds a fun jazz/funk/soul edge to their off-kilter blend of scruffy British rock ’n’ roll; this is music that wouldn’t sound out of place on the soundtrack to a teenage werewolf comedy or in a N’awlins voodoo swamp with an audience of alligators getting down."

On Who Killed ... The Zutons, Harding provides everything from the understated sonic bulk on mellower songs such as "Confusion" to spastic, almost atonal honking on the harder-driving "Dirty Dancehall." She’s also the band’s designated dancer.

"It’s not like the rest of us stand still on stage anyway, but she doesn’t sing much, so she has all the time in the world to do her own thing," says McCabe, adding that The Zutons aren’t equipped to be shoe-gazers.

"We’re not a cool band, and we’re not trying to be cool. We just want to make people dance. We know we’re not the coolest thing in the world, but it doesn’t mean we’re not having a good time."

There’s plenty of camp in the cover design of Who Killed ... The Zutons, with its B-movie poster art of townspeople fleeing in terror.

"We all grew up liking cartoons and stuff, so we just wanted it to be colorful," McCabe says. "We didn’t want some photograph of us on the front smoking ciggies and trying to look cool in stupid leather jackets. There’s so much stylized stuff out there, and we just wanted to go against that."

The cover doesn’t suggest that the music boasts such a twangy country edge, along with obvious nods to Sly & the Family Stone. "Moons and Horror Shows" is a gut-bucket country song that’s far too authentic for country radio, while "Confusion" taps into McCabe’s affinity for Neil Young, Hank Williams and Johnny Cash.

"Both Neil Young and the Band are really country in a weird way, not the typical country music, but that’s kind of where it comes from. It’s just good to play on the guitar. It’s always easy, and it’s always good."

"That’s where those songs kind of come from, but when we do it, it’s not really traditional. It’s more Zuton."

Who Killed … The Zutons is currently available. For more information, visit www.thezutonsusa.com.