Disoriented: Reflections of a Freshman Orientation Long Since Past 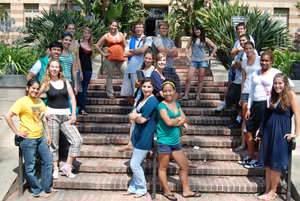 For many, the jump from high school to college is a significant one. Going from middle school to high school was never nearly as big a deal, as most everyone would move up to ninth grade together.

When it comes to college, though, concerns start coming up, concerns such as getting accepted into college in the first place, moving away from home, making new friends, not being able to see some friends for (gasp) three whole months, taking care of yourself, and so on.

But, when it comes down to it, the shift from high school to college isn’t really that big of a deal. Adaptation comes relatively quickly, and before you know it, you’ll fall into a routine and move on with your life.

That’s why, when it comes to my memories of orientation at UCLA, I can’t help but remember them being a waste of time. The three-day excursion on campus aims to get students acquainted with the campus and start meeting people. This is fine and all, but three days? Really? It’s a bit excessive (and expensive) to spend three days doing things that could be done in an afternoon.

Not to mention the fact that the two other guys in my group were conspicuously absent on the last day, leaving me with a large group of girls, something I was absolutely not used to and which led me to zip up my lips and say nothing. Besides filler activities such as a campus scavenger hunt and discussions about our feelings about going to college, there was at least one important task that had to be done at orientation: choosing classes.

However, unlike the relatively easy online method that students generally use, the orientation counselors inexplicably herded us into a room with papers tacked onto the walls. If this was a joke, I sure as hell wasn’t laughing, and if it was some kind of weird tradition, I was all for a revolution.

The room was boiling hot, and it amounted to me trying to peek over masses of sweaty bodies to get a glimpse of the classes being offered. They could’ve just allocated some computer time to look up classes, but instead I felt like I was in the pit of a Fall Out Boy concert.

Granted, when I finished piecing my schedule together, I felt an immense pride and a sense of accomplishment. That is, until I found out about the online process, at which point it felt like I’d been kicked in the face.

I rant about orientation, but the fact is that it can be a great way for people to acclimate themselves to a totally different environment and meet people. Besides developing a flair for the “handshake-what’s your name/year/major/hometown” routine that will be employed so, so much throughout college, many people also meet friends – real, long-term friends, not just the “single serving” friends that you say “hi” to and then forget about (though that happens, too).

I felt alright about orientation at the time; my resentment simply developed after actually experiencing college. At the same time, orientation is an experience in itself.

It could, at times, be awkward, frustrating and wearisome. But, it’s something I lived through, and that (usually) makes it all worth it.