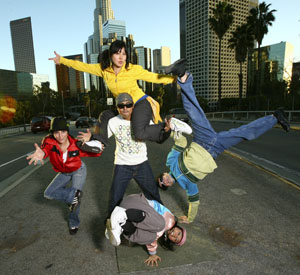 “Breaking the Cypher” is a multimedia street dance spectacular. Below, artistic director Amy “Catfox” Campion drops science about the cypher.

How do you pick the dancers that perform in “Breaking the Cypher?”

Last year, my partner in artistic direction, Jacob “Kujo” Lyons, and myself, held an audition at the Edge in Hollywood in order to cast dancers for the original “Breaking the Cypher,” which premiered at the Ford Amphitheatre on Oct. 5, 2007. That version of the show featured about 30 dancers. This year we scaled back [so we can affordably tour] to one DJ, one MC and eight dancers.

How did you come up with the idea for the show?

We first came up with the idea of the show when we submitted the application to the Ford Amphitheatre in Fall 2006. At that time, I was working on a project called “Be Girls or B-Girls” that involved an all-female cast of breakers, including Peipei “Peppa” Yuan and Sara “Ms Mighty” Fenton, who are still part of the cast today.

Additionally, I was performing with Lyon’s Lux Aeterna Dance Company, as was Sara Fenton. So the four of us (Jacob, Peipei, Sara and I) came together to create an idea for a show.

We wanted [it] to reveal to audiences an entirely different side of breaking and street dance, one that is expressive and hyper-creative, playful but thoughtful. We wanted to show how street dance can interact with other styles of dance and how it can come to life on film and in poetry. We wanted to create a hip-hop show that was beautiful, vibrant, exciting and that flew in the face of all the negativity, violence and misogyny that mainstream media portrays as “hip-hop.”

What was the response to the show in October?

My favorite part of the whole experience was seeing such an incredibly diverse crowd in our audience all clapping their hands and bobbing their heads to the beat, including grandparents in the front row and young kids who practiced their moves in the aisles during intermission.