'You Got the Wicked Style': Finding Inspiration in Los Angeles' Japanese Culture 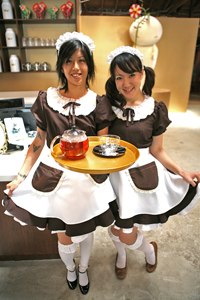 One of the hardest things about being a fashion writer is finding inspiration. Throughout the years, I’ve used various “muses” to awaken my imagination, depending on where my head is at.

Lately I’ve been drawn to Japan. My budget hasn’t allowed me to visit yet, so I’ve had to make do with the Japanese scene in Los Angeles. Starting with Royal/T, a new art gallery in Culver City, I discovered the total shopping experience at their gift shop. Their brochure reads: “Inspired by contemporary Japanese otaku (overtly obsessive fan) culture, it carries a creative line of art, design and photography books, magazines, toys, bags, T-shirts, watches, jewelry, wallets, CDs, DVDs and limited artist multiples and prints rarely found in the United States representing artists such as Yoshitoma Nora, Takashi Murakami and Yayoi Kusama.”

Adjacent to the shop, within the 10,000 square-foot gallery designed by Takaya Goto and Lesley Chi (Goto Design), there’s also a café. The simple menu of tea, coffee and comfort food is almost underplayed by the Cosplay (costume play) waitresses dressed in brown and white French maid uniforms. Their current exhibit, Just Love Me, which ends Aug. 9, is a vibrant exploration of cuteness interpreted by Yayoi Deki, Ghada Amer, Jim Hodges and other artists.

Following my visit to Royal/T I wanted to explore more of Los Angeles’ Japan-ness, so on June 21, I went to the Summer Festival at Venice Japanese Community Center. Arranged in adjoining rooms were breathtaking examples of watercolor paintings, ink paintings (Sumi-e), calligraphy (Shodo), flower arranging (Ikebana) and bonsai (dwarfed trees). For $2 on up there were also handmade cards, decorative bookmarks and picture/refrigerator magnets, wooden boxes and fancy gift bags decorated with calligraphy for sale.

“We decided to sell things this year as a fundraiser,” remarks a Community Center spokesperson.

Held once a year, there were game booths and Japanese food, such as sweetened Azuki bean ice cream dishes, sushi bento boxes and udon soup, at the festival, too. The center has been on Braddock Drive since 1921, and their goal now is to promote Japanese American culture.

My last destination, on my L.A./Japan tour, was one of my favorite spots for inspiration, Mitsuwa Marketplace in Mar Vista. Nestled in a strip mall next to a CVS Pharmacy, Mitsuwa has a really cool bookstore/cafe, Santa Monica Books & Café.

Whenever I visit I always stop at the bookstore to buy a few Japanese fashion magazines. The best deals at Mitsuwa are the sales tables of fashion magazines in front of Santa Monica Books & Café, where you can find current titles like Cutie and Jille for under $5. Brimming with an almost overwhelming array of styles, they never fail to inspire me.

But the best part of Mitsuwa is the food. Filled with restaurants and shops, they carry all the latest and greatest for all of your Japanese cooking needs. You can eat there or take out. And the prices are good, too.