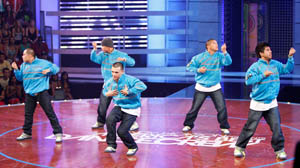 I put on my best jeans, new ruffled top and copper hued pumps. I was ready for the night. Only it was 5 p.m., and I was not headed to a club, party or even a local watering hole. I was going to a taping of “America’s Best Dance Crew,” one of the hippest ways to spend a hot summer night.

When I arrived at the Warner Brothers studio, already the line twisted and turned around the lot. Unlike most other television tapings, dripping with tourists in Disney paraphernalia, the crowd looked like more of a cross section from any trendster Hollywood club. The show notoriously chooses the best-dressed (and looking) women to occupy the first few rows – frustrating if you do not look like one of the “plastics” from Mean Girls.

After finding my way to the green room, complete with the judges and hosts, I chatted with Layla Kayleigh, co-host with the dimpled, “Dancing with the Stars” runner-up Mario Lopez. Tonight was “Janet Jackson Night.”

In an ode to the pop star, each group randomly was given a classic song to choreograph and perform, while incorporating signature moves from Janet’s videos and adding some of the group’s own special touches. It was hard to pull myself away to visit the set, but indeed I did.

Stadium seats surrounded the circular stage, and neon lights rotated from the performance to the crowd. In between takes the music blasted, and the audience got up on their feet again and again, creating a never-ending dance party.

Those that especially wowed the operations team were guaranteed a spot at next week’s taping, causing rival sides of the stadium to break into stationary dance battles (the stands were packed!). Like most good nights out, the crowd took the party seriously.