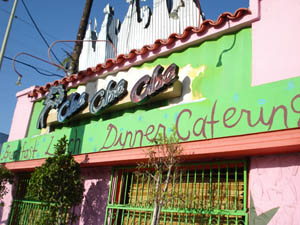 Like the Latin dance that bears the same name, Cha Cha Cha is energetic, sensual y muy caliente. The restaurant successfully fuses the flavors of South America and the Caribbean for an international taste experience.

Their signature dish, the Jamaican Jerk Chicken, embodies Cha Cha Cha in a mouthful. A breast of chicken is marinated in special jerk spices resulting in a sweet and spicy taste explosion. Served with black beans, rice, cabbage slaw, fried sweet plantains and pureed yams, the meal leaves you stuffed.

A great way to go if you’re dining with a group of friends is to get a pitcher of Cha Cha Cha’s tart and tangy sangria along with several of their Tapas platters. Make sure to order the Banana Boats: savory plantains stuffed with ground beef and vegetables served on a bed of pineapple salsa. Other standouts are the Crispy Shrimp Cakes with homemade tartar sauce, the Sopes de Pollo, Black Bean Tamales and the Latin Spice Fries.

Brunch at Cha Cha Cha is not to be missed – from omelettes, Banana French Toast to traditional Churros. Lunch salads and sandwiches are also served every day until 4 p.m.

Chef Toribio Prado (personal chef for Sophia Loren, opening chef for the Ivy and Hugo’s) and Mario Tamayo established Cha Cha Cha in 1986 with a family feel in mind. And as Prado’s nephew, Javier Anaya, graciously welcomes you into the restaurant, you immediately realize that dining at Cha Cha Cha feels like a festive party at a friend’s.