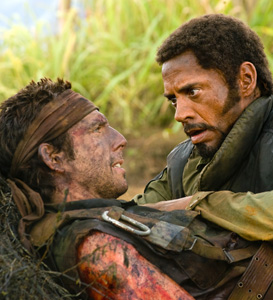 Even before there was enough footage for a trailer, Tropic Thunder was one of the most talked-about comedies in Hollywood. When the film unspools today, this will officially be the Summer of Robert Downey Jr. as he follows up the blockbuster success of Iron Man with one of the greatest performances we’ve seen from this acting genius since his Oscar-nominated turn in Chaplin.

For Downey Jr., unearthing the character was completely unexpected.

“It was such a thing of faith and trust because I had no idea what I was doing,” he admits. “I just knew I would be in special effects make-up and I was either going to be really sorry I did this movie or relatively happy that I’d participated, provided something subtle and magical happened, which is that I actually created a character.”

So how does he immerse himself in the second skin of a role like this?

“It was delivered to me,” he says, sounding half mystical, half sarcastic, “which I don’t understand at all. I’ve just come to be afraid that it won’t happen when I need it to or very grateful when it happens in kind.”

The potential for controversy, actor Justin Theroux (also the script’s co-writer, making his screenwriting debut in a big way) believes is mitigated by the film’s tone.

“We knew it was something we had to handle just right,” Theroux says. “At the end of the day, we’re not putting a guy in black face; we’re putting a really pretentious actor in black face. We’re the object of our own ridicule. We’re not making fun of Vietnam veterans. We’re making fun of actors who think that when they go to make a Vietnam movie, they’re really going to war.”

The idea has been gestating in director and star Ben Stiller’s brain since 1987.

“At the time,” Theroux says, “a lot of his friends were doing war movies, and they were all going to two-week survival boot camp for actors. He thought it would be funny to do a movie where a bunch of actors go to boot camp and come back to Hollywood with PTSD. That was the original concept.”

Though the idea was simple, the execution was exacting and rigorous.

According to Theroux, “Ben is fanatical in the best possible sense. We would write each scene copious amounts of times with every possible joke. [Ben’s] a mathematician when it comes to editing comedy. He creates numerous options for himself. For every punch line or joke, we had 10 other options.”

That’s the kind of discipline that comes from a lifetime in the business and parents (Jerry Stiller and Anne Meara) who are legendary comedians. But Stiller has other gifts behind the lens.

“The direction of Ben was tremendous,” says Jack Black. “He was much more collaborative than a lot of directors I’ve worked with. He made me feel like I was part of the creative process, not just a puppet.”

Stiller tries to simply brush off the compliment saying, “It helps to have some sensitivity to what it feels like to be in front of the camera.”

However, the role of director is one he prefers.

“Since I was 10 or 11, that’s what I’ve really enjoyed,” Stiller admits. “I always felt like directing was what I’d end up doing. I love acting too but, for me, directing is a much more fulfilling creative process because you get to see the whole thing through. When you’re acting, you’re obviously putting it out there, but you don’t have that feeling of completion.”