"The Hills": A Super-Fan’s Comprehensive Guide to America’s Guiltiest Pleasure 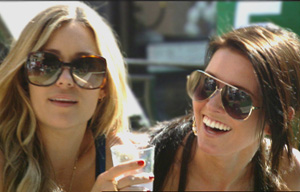 OK, fashionistas and drama queens, it’s that time again. MTV’s “The Hills” is back. This cultural monolith was initially born from another hot property (“Laguna Beach”), but has since taken on a life of its own. The terrifically hip group of 20-somethings is influencing fashion, entertainment and nightlife as each episode passes by.

But with so much action, it’s almost impossible to keep up with all the goings-on in them there hills. Luckily, we’ve put together your complete guide to the show that has rocked your world.

THE SKINNY: A BREAKDOWN OF THE SEASONS

So Lauren threw the deuces at Laguna and made her way to the glitzy streets of Hollywood. She moved into her apartment with new buddy Heidi and prepared to take the city by storm by landing a coveted internship at Teen Vogue while attending fashion school.

Heidi shows an early aptitude for organizing the group – she’s the one that brings Audrina into the fold while battling her own relationship ups-and-downs with then-beau Jordan Eubanks. Heidi didn’t seem to be nearly as driven as Lauren and wound up dropping out of Los Angeles’ Fashion Institute of Design & Merchandising to pursue a career in PR.

Meanwhile, Lauren went through drama with Jason – her beau from Laguna. The season ended with one of the most toe-curling cliffhangers ever: Would Lauren take a summer internship in Paris or spend the three months shacked up in hipster bliss with her lover man?

Season Two: Lover man prevailed. Lauren turned down the City of Lights and winds up regretting it soon after. Heidi gives up one codependent relationship for another when new honey-bunny Spencer steps onto the scene. Sure homeboy’s got more game than the Olympics, but maybe he’s not such bad news, right? RIGHT?!

Moving on ... Heidi thinks she’s preggers (She’s not.). Lauren and Heidi grow apart – big time. Lauren and Audrina become closer. Heidi gives the big “peace-out” to living with Lauren, opting instead to move in with Spencer, who has all but estranged her from her former friends.

Meanwhile, Whitney is forced to compete with a snooty East Coast chick for a job at Vogue – drag! But who gets the gig?

Lauren gets a second chance to make a first impression when her boss at Teen Vogue sends her and Whitney to cover a couture event in gay Paris. Lauren damages an expensive dress – the horror! She also gets jiggy with a total babe of a French dude – the affair is all quite PG-rated.

Season 3: After becoming Lord of the Interns at Vogue, Whitney decides that babysitting co-eds just isn’t her bag. She leaves for a job at Kelly Cutrone’s People’s Republic.

Lauren and Audrina’s friendship begins to show signs of strain with the on-again, off-again appearances of Audrina’s hotter-than-hell but socially retarded lovah, Justin “Bobby” Brescia. Lo is suddenly hanging out with the gang – a lot.

L.C.’s companion Brody Jenner keeps mad-dogging all of Hell-A’s cutest cuties while giving no love to Lauren. She gets fed up and goes back to Steven, which smells more like a ratings ploy than an actual life change.

There’s some nonsense about a sex tape, some more catfighting, a lot of whining about what it means to be a friend and the introduction of “She-Pratt” (that’s Spencer’s sister Stephanie). But this season’s cliffhanger hinges on whether Audrina and Lauren’s friendship has been irrevocably damaged by the third-wheel dynamic of Lo’s presence or if it’s all just a ruse.

Season 4: With nothing more than nascent images of Lauren Conrad’s mascara-tear-soaked face amid a heated convo with Audrina about Lo’s un-cool affect on the girls’ BFF-factor, fans have very little to go on. Only time will tell what horrendous injustices are about to go down. But my, my, my ... won’t it be fun to watch as it unfolds?

GLAMOROUS GIRLS: GET THE LOOK

Got a thing for billowy mini-dresses cut up to there? Maybe skintight PVC pants are your thing. Or perhaps ginormous handbags and Nicole Richie-esque shades are more your style. If so, “The Hills” offers glamour girls a glimpse into the hottest trends and sexiest looks available.

Take, for example, the Lauren Conrad Collection. L.C. launched her own line in 2007. The bevy of girlie-chic outfits was predicated on the silhouettes of the 1970s and 1980s. Think: Jackie O. if she was 22 and hailed from Malibu.

While the initial buzz on the collection was loud and lascivious, the blogosphere is ripe with rumors that L.C.’s duds are being dropped from swanky boutiques quicker than you can say, “WTF!” Kitson (115 S. Robertson Blvd., Los Angeles) is the latest shop said to send the Lauren Conrad Collection on its merry little way. Still, the spring and summer offerings are currently available online.

Born Uniqorn designers Taryn Manning and Tara Jane insist that Audrina and L.C. are big fans of their clothes. This collection of sportswear is fresh and funky and everything you’d expect to see scenester chicks rockin’ on a Tuesday night at Cinespace. Born Uniqorn is great because it’s chock-full of hoodies and tees embellished with golden emblems, making it an easy line to transition from the beach to the bar.

But one of the best ways to emulate your favorite star from “The Hills” (aside from biting the look and interpreting it to suit your needs) is to literally purchase the exact items that these lovely ladies don from week to week. Seenon.com serves up the earrings spotted on She-Pratt, the dresses rocked by Lo and the even the Gap tee worn by Lauren. The site gives a rundown of which episode the item(s) appeared in and even redirects shoppers to the correct merchant site to place an order.

Any true fan of “The Hills” knows that most of the best drama has gone down at this Hollywood den of sin. Proprietor Sylvain Bitton must have a smile on his face 10 miles wide from all the press that Lauren and Speidi’s verbal sparring has garnered for the club. You’ll remember that this is the location of Lauren and Heidi’s nasty little tiff at the beginning of Season 3. Makes you go fetal just thinking about it.

Cobras & Matadors (615 W. Beverly Blvd., Los Angeles): I’ve been obsessed with the place ever since Audrina and Justin Bobby went on a date there. This eatery is a sexy place for a first or even a second date. It’s dark. It’s dangerous. And ever since its debut on “The Hills,” it’s legendary.

Big Wangs (1562 N. Cahuenga Blvd., Hollywood): Remember how cute Whitney was when she had a date with her uber-hot trainer, Jarrett? Well, this is the sports bar that they played billiards in. FUN! Located smack dab in the heart of Hollywood, Big Wangs is the perfect spot to get your eat on, while catching up on game stats with the coolest neighborhood blokes.

Don Antonio’s (11755 W. Pico Blvd., Los Angeles): If I had a nickel for every time someone told me that they spotted Spencer and Heidi here, I’d have a buck and a quarter. This Mexican cantina is a West Side oasis where all the college kids flock for cheap eats and insanely good sangria.

El Coyote (7312 Beverly Blvd. Los Angeles): Audrina had a disastrous date here that I’m sure was only made bearable by the amazing food. Aside from being frequented by the cast of “The Hills,” this fabulous and kitschy eatery is also the place that the members of Maroon 5 go to celebrate after awards ceremonies. And that’s straight from the mouth of lead singer Adam Levine.

Milk (7290 Beverly Blvd., Los Angeles): Back in the day when they were just two single gals struggling to get ahead at Teen Vogue, Lauren and Whitney waxed poetic about life and love at this unique little cafe. I recommend the Milky Way Malt.

Audrina/Quixote Studios: Once upon a time, Audrina was a sweet little secondary character on the show that would be king. She sat behind a big desk at the world-renowned Quixote Studios and answered phones. Hey, everyone’s got to start somewhere, right? If you’ve picked up a magazine like Maxim any time within the past few years, then there’s a pretty good chance that at least some of those pictures were shot here.

Audrina/Epic Records: OK, so in the real world, people don’t go from receptionist to A&R guru during the course of a TV season. But for Audrina, her rocker dreams became a reality when the producers of “The Hills” and the heads at this respected label saw fit to promote Patridge and allow her the opportunity to work with some of its most respected talent.

Lauren and Whitney/Teen Vogue: When the show debuted, L.C. looked as though she would develop a serious rivalry with the beautiful blonde girl named Whitney Port that she shared her tiny office space with. Whitney was polished and always on the ball. Lauren, on the other hand, demonstrated a little bit of that “fish out of water” vibe. Fortunately, for us and them, that was not the case.

While Vogue’s little sister may have been a questionable spin-off in the beginning, it’s solidified itself as a foremost authority in glamour and fashion for the ’tween and teen set. It’s also provided some memorable moments such as setting the stage for Whitney’s shameful Oscar spill on “Good Morning America.”

Lauren and Whitney/People’s Revolution: Back in 2005, Lauren was sent to procure a spot for fashion’s big gun, Hamish Bowles. As she nervously attempted to smooth over a slight seating faux pas for her bosses at Vogue, she bumped heads with a tough-talkin’ broad that encouraged her to speed up or find another job in another industry.

That ball bustin’ was as memorable as the torture that Anne Hathaway’s character endured in The Devil Wears Prada. What’s even more appalling is that years later, that mean door lady with the sage advice would become Lauren’s new boss. Kelly Cutrone (and her firm, People’s Revolution) is one of the hottest and most sought-after fashion show producers there is. But to die-hard “Hills” fans, she will forever be that mean lady that needs to switch to decaf.

Heidi/Brent Bolthouse Productions: Does she really work there or doesn’t she? That’s the question on everybody’s lips. It seems that the latest rumor swirling around town is that Heidi’s tony job at this swanky and cool firm is nothing more than a PR stunt for the show.

I mean, it’s hard to imagine that Renaissance man Brent Bolthouse (co-host of Indie 103.1’s revolutionary jam-fest “Feel My Heat”) has built a carefully executed empire – only to allow every Tom, Dick and Heidi to truly infiltrate its ranks with nary a college education.