The Academy Is...: Higher Learning 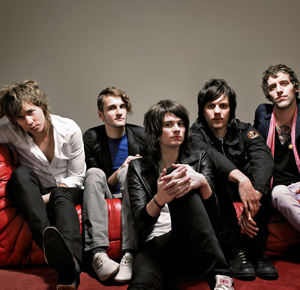 It seems like just yesterday that this tiny little band called the Academy Is… was releasing their debut album, fronted by a young William Beckett not yet old enough to buy a beer at the venues where his band was playing. But the kids, as the cliché goes, grow up so fast.

They’re still not all of legal drinking age, but the members of the Academy Is… are soon to have three full-length albums under their belts and have done the accompanying musical and personal growth inherently attached to writing that much music. With the upcoming release of Fast Times at Barrington High, Beckett, guitarists Mike Carden and Michael Chislett, drummer Andy “the Butcher” Mrotek and bassist Adam Siska have learned from past mistakes, found new inspirations and reconciled both within their music.

“There were a lot of things with Santi that I feel I didn’t get to say,” says Beckett. “We all knew each other in high school, we went through different things since then – a lot of changes, a lot of trials and tribulations – it’s been a dynamic five years, so on this one, I wanted to encapsulate that more. It’s really autobiographical about me and relationships in my life, but it’s all very positive and hopeful. It plays to my strengths as a songwriter.”

Admittedly, the conditions under which the band’s previous album were written weren’t exactly ideal either, with a change of approach and scenery for this one going a long way to create a different effect.

“We were writing [Santi] during Warped Tour ’06, which turned out to be really stressful,” says Beckett. “Now we just finished this record, so it’s all exciting, and it’s exactly the record we wanted to make. I haven’t been this excited about our songs ever. There’s a real sense of urgency on this record, it’s all about enjoying the moment and soaking it in because you never know how long this moment in particular is going to be here.”

Also aware of the obvious question that poses though, he jokes, “But I talk about shitty relationships with girls that I’ve been in, too.”

Regardless of subject matter, Beckett maintains an understated quiet enthusiasm when talking about the personal process that writing the album took him through.

“I think I found my voice more than ever on this record,” he says. “It took me going back home, seeing my old neighborhood and realizing what’s important and how I got here.”

“My voice is a certain way, for better or worse, and I can’t change that. I think we finally found a sound to fit around my voice to make this band exactly what it is,” he says.

Though now there is a new generation of bands striving to break out who would list Academy as one of their influences, Beckett insists their new work will recapture that youthful energy their fans fell in love with on their first album Almost Here. Only 23 now, Beckett’s sometimes introverted demeanor masks a wisdom that understands more than he may let on, but it’s not at the sacrifice of his passion.

As he says, “I still feel like one of the kids out here, doing what we love and trying to do the best that we can.”

Fast Times at Barrington High will be available Aug. 19. The Academy Is… will perform Aug. 17 at Warped Tour Carson. For more information, visit www.theacademyis.com.