Henry Poole Is Here: Finding a Miracle in Your Own Backyard 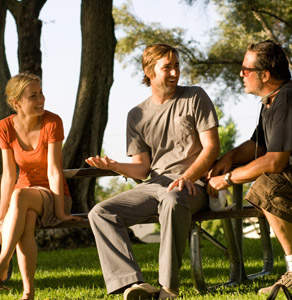 Henry Poole does not believe in miracles, and he needs one more than most. Faith is a hard thing to characterize. Some have a lot, most have a little. Some have none.

The story begins with Henry Poole (Luke Wilson) moving into a non-descript middle-class Southern California neighborhood. Poole suffers from an unnamed illness, we later learn – a plot point, which is underscored by the character repeatedly saying, “I’m not going to be here very long.”

Known more for comedies like Old School and Legally Blonde, Wilson gets to flex his dramatic acting chops in Henry Poole Is Here. For director Mark Pellington, it was a natural fit.

“Within five minutes of meeting him I knew he had this beautiful sadness that [was] untapped,” says Pellington. “You could see it in his eyes.”

Pellington uses his own sadness as inspiration for the film.

“In the summer of 2004 my wife passed away suddenly and tragically,” continues Pellington. “These experiences change us forever, shape us and make us who we are, for better or for worse.”

In the film, Poole just wants to be left alone to wallow in his misery. The neighbors refuse to comply with Poole’s desire for solitude, especially once a mysterious face begins materializing on the outside wall of his house. Poole asserts the image is simply a stain from a bad stucco job, but for his most emphatic of neighbors, Esperanza (Adriana Barraza), this is most certainly the face of the Lord Jesus Christ, complete with tears of red blood which reappear daily (foiling poor Poole’s attempts to wash them off).

“When I am working, I am not thinking about getting an Oscar,” says Barraza, best known for her harrowing turn in the film Babel, which earned her an Oscar nomination. “I am just trying to get through the day and give the director what he wants.”

“Adriana is so good at making you feel in the moment,” says Wilson. “She has the same quality that Ben Kingsley or Gene Hackman has. It was one of the best working experiences I’ve ever had.”

The story progresses, and we continue to meet a variety of other interesting characters, including the beautiful divorcée Dawn Stupek (Radha Mitchell), who melts Henry’s heart, along with her adorable daughter Millie (Morgan Lily), mute since her parents’ breakup. Pellington first took note of Mitchell in her performance in 2000’s Everything Put Together.

“People often see Radha as playing a little colder or a little more detached; but there is warmth and a joy that’s in her that she hasn’t had the chance to show until now.”

“Henry does not believe in anything right up to the last beat of the film,” she explains. “He’s constantly questioning … I think that is where the humor in the story lies.”

After what appears to be a string of miraculous healings resulting when ailing people simply touch the enigmatic image, this deepening mystery ramps up into full effect, much to Poole’s chagrin. Esperanza brings in Father Salazar (George Lopez), the reasonably cautious, but hopeful priest who has the stain tested for authenticity. Lopez turns in a surprisingly effective performance.

“My recovery from kidney disease has changed me,” says Lopez. “I have become more spiritual.”

After such a convincing performance, one might wonder if Lopez ever had any designs on becoming a man of the cloth in reality.

“Me, a priest?” quips Lopez. “I would never pass the background check.”