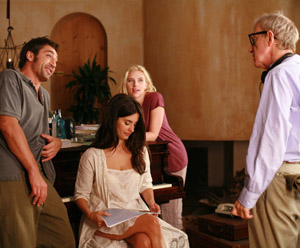 As a nerdy Jewish kid growing up on the mean streets of West Los Angeles, Woody Allen was, for me, a kind of god. Unfettered by an immutable nebbishness, Allen made a star out of his own persona. The characters in his movies, often played by himself, were clumsy, awkward, self-conscious, shy and woefully insecure.

While we laughed at them, they always inspired a certain tenderness. The schlemiel who always tries after the beautiful young woman, the guy who puffs himself up as a hero only to fall smack on his face, a person trying to gain a little respect.

Of course, in the real world, Allen commands great respect. As an artist his output is amazing, from stand-up comedy, to essays and short stories, to over 40 films written and directed, Allen has consistently created remarkable work. For this reason many people have turned to him to gain some kind of insight on his process.

“From an early age I understood the value of self-discipline,” Allen offers at a recent press conference. “You have to do the ‘thing’… There are a million distractions in life. You can’t spend time hemming and hawing – getting coffee, making lists, putting up flash cards. At some point you have to do the ‘stuff’. I see people all the time with incredible talent who don’t succeed simply because they don’t put the work in. I always say, 80 percent of life is showing up. If you actually do it, you are more than halfway there.”

There is a matter-of-factness in his reply, no condescension, no scolding, no self-righteousness, merely a very calm, humble “way-it-is.”

Unlike many of the characters Allen has portrayed or written about, the actual man comes across as relaxed, accessible, honest and open to talk about and even laugh at himself. If there’s a similarity between his movies and himself, it’s this willingness to be the butt of his own humor, a sort of kindhearted self-deprecation.

He consistently points to the qualities of his cast and crew as crucial to his success: “My secret is that I hire great talent.”

It’s a modern take on the “innocent-Americans-get-swept-up-by-crazy-Europeans” genre. As such, it’s consistently entertaining: funny, irreverent and sexy.

Johansson and Hall are titillating as the easily manipulated young American flesh, and Bardem, as the impossibly seductive artist, is great. It’s Cruz, however, who steals the show as his jealous and desperately passionate ex-lover.

The film is not Allen’s most profound. There’s little in the way of probing social commentary.

The story exists in a kind of bourgeois dream world of characters who never even utter the word “job.” Yet, it doesn’t seem to aspire to such things and is, therefore, refreshingly free of pretensions.

The question it poses is: How do we cope with getting what we ask for? Each of the characters bears responsibility for the absurd situations in which they find themselves.

Allen makes no appearance in the movie, but his presence is felt everywhere. We share his relish of the juicy details that unfold. If he is guilty of being the dirty old man of that ignominious tabloid episode, we are at least guilty alongside him for enjoying his films so.

The Woody Allen in person offers no apologies, no qualifiers, no excuses for his work. He simply “shows up,” giving his film as he gives of himself. For this, we are blessed.