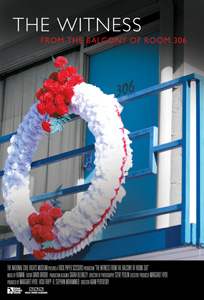 It’s not every day that Memphis drags its goods out to Los Angeles – Elvis made it as far as Las Vegas – but this Friday starts the Los Angeles engagement of a mini-documentary about a more important slice of Memphis history: the Dr. Martin Luther King Jr. assassination.

There’s no special anniversary or remembrance month necessary because The Witness: From the Balcony of 306 is a moving, anytime look at that fateful April day through the eyes of the last living person who was standing with Dr. King at the time the shots were fired (Reverends Jesse Jackson and Andrew Young ran up to the balcony afterwards).

Both emotional and educational, The Witness was created to emphasize the Civil Rights Movement’s relevance to all struggles and also to provide a “beacon of hope” for those practicing non-violent social activism. In its first time-ever public viewing, The Witness is screening five times a day until the end of next week.

Brush up on your U.S. history and witness a small part of it on the big screen because as Kyles says, “They may have killed the dreamer, but not the dream.”