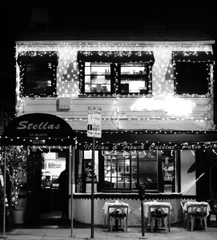 It’s always a pleasure to find a great restaurant, but it’s even more special to find one in an area you’ve visited many times before. If you’ve lived in Los Angeles for at least, I don’t know, three minutes, you’ve "done Melrose."

After dragging wide-eyed out-of-towners to every baby-tee store, fetish shop and – heaven help me – Diesel store on the street, a retreat to eat is next in order. Surely, there must be a place that’s a few steps above Johnny Rocket’s but isn’t as trendy or expensive as Table 8, for example.

When you first enter Stella’s, you’ll think you’ve walked into an Edwin Hopper painting. A long chrome counter with built-in stools and a low ceiling suggests a greasy spoon dive, not fine dining.

However, go further and you’ll discover a lovely outdoor garden with a side room containing large comfy couches, which can be used for larger parties or more relaxed dining. Antique-looking chandeliers are a nice touch along with dangling stars, which is what "Stella" translates to in Italian.

When ordering, the beautiful Miss Carol and I relied on the culinary wisdom of our waiter, Neal, who has been working at this location for the last 17 years. As you can imagine, he’s seen them all – from the Red Hot Chili Peppers to Julia Roberts, and Drew Barrymore in her pre- and post-rehab stints. He’s also proud to let us know that couples often come in on their anniversaries, often telling him that Stella’s was the site of their first date. He also knows the menu well, so when he spoke, we listened.

We started with the baked goat cheese appetizer, a musky blob of heaven wrapped in a pastry crust, floating on a bed of sweet basil tomato sauce. It’s a very rich dish, with one order enough to share among three or four people. This was a theme of the evening as every dish is large enough to share.

We followed with the Panace salad, a mix of greens with artichoke hearts, asparagus, hearts of palm and avocado in creamy vinaigrette. The dressing, which could kill the dish if overdone, was perfect – not too creamy, with a spicy kick and a hint of raspberry. Miss Carol commented that the salad and the goat cheese appetizer would be a perfect dinner for three girlfriends to share over wine and gossip.

With 22 pastas to choose from, we followed Neal and co-owner Orit’s advice and ordered the chicken marsala pasta. I’d never had chicken marsala in a pasta dish before, and this entrée did not disappoint. Again, the chef chose not to overdue the sauce, which could have easily ended up a buttery mess in lesser hands. The dish is completed with slivered toasted almonds, which added a nutty flavor and a nice crunch for contrast.

Have I forgotten the filet mignon? If you’re like me, you don’t mind spending a little extra on a good cut of meat. I usually leave the filet ordering to more traditional steakhouses (I’m looking at you Musso and Frank’s), but there was a glint in Neal’s eye when he mentioned the dish as a special, so I went on instinct.

Cooked rare, the filet gave way with just a hint of pressure from my knife. The port reduction sauce was tasty, but with such a beautiful cut of beef, all I needed was a pinch of salt, a dash of pepper and a glass of house red wine.

While Miss Carol and I did not save room for dessert, I insisted we forge ahead, as that’s my job. But really, can’t you always find room for homemade apple tart, warmed over, with vanilla ice cream and sliced strawberries on the side? Crème caramel, chocolate cake and four others were also offered, but there is only so much two people can take, or shall I say, intake.

While I don’t recommend this type of gluttony for most people, the array of choices at Stella’s makes it hard to resist. Either as a romantic dinner for two or a group dinner with friends, Stella’s will be the highlight of your next Melrose excursion.