Cobra Starship: These Shoes Were Made for Dancing 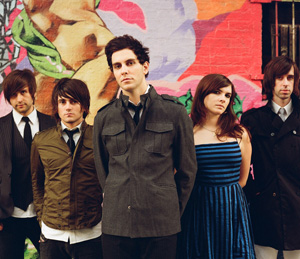 So, we all know Cobra Starship had that one song a few years ago that everyone knew the words to but not many took seriously. Given their roots, the band would have an uphill battle in proving their legitimacy, but much to the credit of keyboardist Victoria Asher, guitarist Ryland Blackinton, frontman Gabe Saporta, drummer Nate Novarro and bassist Alex Suarez, they’re not afraid of working up a little sweat in the name of their craft.

With the release of their latest album, Viva La Cobra!, Cobra retains their half-serious, half-pointed witticism, but sees a marked leap in execution with this album being a collaborative effort from all members, including producer Patrick Stump of Fall Out Boy, who Blackinton has coined as the band’s sixth member. With an increased variety of styles and influences introduced on the album, Blackinton’s stamp will have listeners exploring outside the band’s social circles and touring mates.

“For writing, I like a lot of funk stuff, and even though it’s something that might not show a lot, it’s something I try to bring to Cobra,” he says, citing such acts as Mudhoney, Parliament Funkadelic and Sonic Youth as some of his varied influences.

“Those are my flourishes, but we all work together, and hopefully it’s a seamless amount of what everybody brings to the table,” he continues, jokingly adding, “and I bring the laughs.”

Make no mistake, Blackinton’s jovial demeanor belies his work ethic where the band is concerned. While many of their early detractors were quick to assume otherwise, Blackinton and his band mates are looking to stick around for a while.

“We just wanted to release another record so that people knew it was a real band because for all people knew, it was just Gabe’s side project,” he says.

To be fair, Blackinton himself didn’t think he’d be where he is now either, but just as his band has a gift for slowly winning over skeptics, being a member of Cobra has made a believer of Blackinton.

“I never thought that I could be in a touring band. I didn’t think that it was practical, and I knew it was difficult, so when an opportunity presented itself, I was enthusiastic about doing it just because I thought it would be cool to change gears, and now we’ve been touring for two years,” he says.

Though he may have been skeptical of pursuing the rock ’n’ roll dream at one point, Blackinton seems to have found the right chemistry with Cobra and isn’t about to be complacent in his success.

“After shows, we’d always stay after and talk to everybody until the last person,” he says. “That’s something that has afforded us a really strong fan base, and we’re extremely thankful for that.”

Considering how rabid that fan base can be in devouring all things related to Cobra and how quickly the band became the cool kids on the scene, you’d never know that underneath his impeccably styled stage persona, Blackinton was anything but the social butterfly in his youth.

While some of his band’s contemporaries thrive on such lamentation for lyrical inspiration, Blackinton assures the days of his awkward youth will not make their way into Cobra’s music.

“We keep that stuff out of there, that’s what makes us who we are,” he jokes, but with the self-assuredness of a guitarist who takes his work seriously.

And why shouldn’t he? Blackinton and his band mates have disproved all who might say otherwise of them and, in doing so, formed a mantra that all of us can live by.

As he says, “Someone wants to make fun of us, we’re just going to dance on them.”