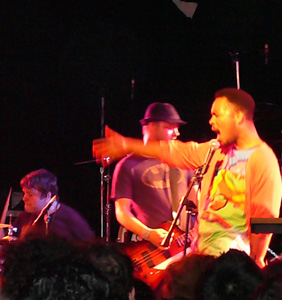 Does It Offend You, Yeah?, the band that’s constantly asking a question, did not offend, but, in fact, dominated the tightly packed Glass House. They opened the night with fury, busting out tracks like “Battle Royale” and “Weird Science,” whipping the crowd into shape before igniting some serious heat.

The band’s frontmen, Morgan Quaintance and Dan Coop, changed up instruments, constantly cycling from cowbell to keyboard to guitar without phasing their robotic vocals or chanting. “We Are Rockstars,” the gritty dance-rock track that put them on the map, closed the set; appeasing the calls from fans.

Immediately following, in a fit of strobe lights, Bloc Party occupied the stage. The smelly venue was witness to the band blowing through tracks including the new single “Mercury.” Other than that one song it was a stale performance, leaving fans without any new tricks from the Bloc.