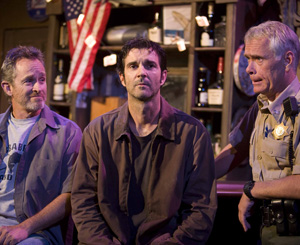 Lewie sees dead people. Every night, he gets drunk and conjures up the image of his dead sister, a police deputy, the grocery store clerk and victims of a botched robbery.

Most of the town’s residents have moved on since the murder, but Lewie is not alone in his grief. Sheriff Alan Sterett (an excellent Paul Dillon) seethes with a quiet rage knowing that his deputy’s killers were never caught. Then, a stranger named Dennis, who seems to know details about the grocery store victims and their alleged killers, comes to town.

The play, directed by Dado, veers off course a few times, yet, overall, there’s some life to “Dead.”