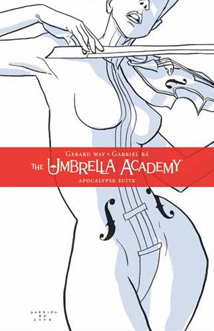 At first glance Gerard Way’s The Umbrella Academy smacks of a vanity project, but the My Chemical Romance singer’s comic debut is no mere dabbling of a dilettante. It’s a genuine work of imagination, full of colorful characters and brimming with fantastic ideas.

When 47 children are born around the world by women who previously showed no signs of pregnancy, a millionaire inventor sets about adopting as many as he can. With them, he forms the Umbrella Academy, a kind of dysfunctional family of superheroes. Some years later, the estranged superheroes reunite to bury their adopted father and once again save the world.