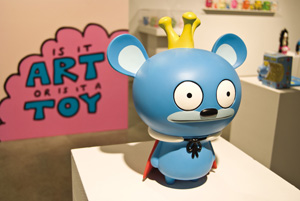 Caravaggio’s homoerotic fear of castration manifested itself in his myriad decapitation pieces. Since then, artists have looked for ways to create headless masterpieces with less effort than years of living in squalor in 16th century Italy. With a finely placed M-80, artists and art collectors have finally found it – with the vinyl art toy movement.

Though mothers have thrown out vinyl figures while children were at camp since the 1950s, toys as an art movement began in 1997 when designer Michael Lau arrived at a Hong Kong toy convention with G.I. Joes customized with hip-hop fashions. Since then, the number of artists working in the medium have burgeoned along with terms to describe the movement: “designer toys,” “urban vinyl” or “not fucking Barbies.”

“Art toys is the most ideal description,” says Tim Biskup, who replicates characters from his Baroque Modernism illustrations – say, the shaggy cyclops Helper – into figurines.

The majority of artists working in the toy medium don’t cast (both meanings) their own characters, but rely on scertain templates known as Dunnys or Qees. The former are three-inch rabbits decorated in an artist’s specific style, the latter provide anthropomorphized egg, bear or cat canvases. Greg “Craola” Simkins’s Dunny has the artist’s signature minatory idiosyncrasies, sporting a bat emblem across its chest and “ima monster” on the back of its growling head.

“Big U.S. toy companies need to remove marketing the way the government needs to abolish the IRS and the FED,” says David Horvath, creator of Uglydolls. “Then we’ll have better toys and more money to spend on them.”

In America, toys aren’t manufactured unless they can sell a million pieces, or be made into/from a film. Says Horvath: “Japan has toys made out the most random, non-licensed subject matters – at a 7-Eleven in Shibuya you can buy a toy of hilltops.”