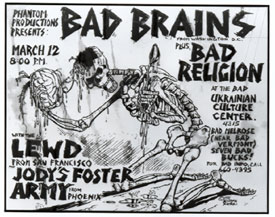 As with any musical genre, it’s often hard to pinpoint a time and a place where it actually began, but in the early 1970s a direct retaliation against the mass commercialism of music spawned a whole new musical movement which came to be known as punk rock.

As this movement spread, Los Angeles became the breeding ground for many legendary punk rock acts such as Black Flag, the Germs and Bad Brains.

Along with the rough and edgy music of the time, the artwork used to promote punk rock shows became just as in-your-face as the music itself.

Now on display at the Hollywood Entertainment Museum, Outrageous! L.A. Punk Rock Flyers, Handbills and Posters (’77-’83) features some the most unique and best known flyers from this unique era in musical history. The sketches full of rage, violence and sex are a clear representation of what the music symbolized.

Culled from the collection of Christian Michael Kulbe, who has been documenting the era since he was a teenager in the ’70s, the exhibit features the work of artists Shawn Kerri, Raymond Pettibon, Pushead Lamort (aka Brian Schroeder) and Ric Clayton, among others.

The works of Shawn Kerri, cartoonist for several underground comics before her premature death in the 1990s, and Raymond Pettibon’s work for the Dead Kennedy’s are some of the standout pieces on display.

Also on display will be punk paraphernalia, publications and a montage of performances from some of L.A.’s grittiest clubs.

The Hollywood Entertainment Museum is located at 7021 Hollywood Blvd. (west of Grauman’s Chinese Theatre), in Hollywood. Winter hours: Open daily from 11 a.m. to 6 p.m.; closed Wednesdays. For more information, call (323) 465-7900 or visit www.hollywoodmuseum.com. Price: $12 for adults, $10 for seniors, $ 5 for students, free to museum members and children under the age of 5.