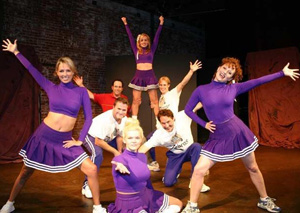 In this play-within-a-play, a hapless playwright named Ben (played by playwright Louis Jacobs) struggles to produce a semi-autographical play about a boy who wants to be a cheerleader despite the protestations of his controlling redneck father. The production lives up to its comedic title. Jacobs and director Amy French spread the hilarity.

The titular cheerleaders are seven self-involved actors, both male and female, slated to perform in the eponymous play. Reality and fiction blur; actor/producer David Fofi plays an actor/producer.

It’s a fine cast (two sets of actors alternate the roles nightly), each of them having a moment of fluffy silliness. When one of the actors meets an unfortunate demise, Ben rewrites the play without the character. After all, the show must go on.