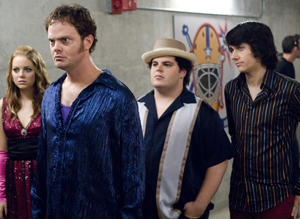 If you’ve got a TV, then there’s no doubt that you’ve seen the fresh face of Emma Stone in movie trailers – EVERYWHERE. The 19-year-old actress became known by, um, everyone, as Jules, the chill object of Jonah Hill’s affections in the breakout hit Superbad.

She also has a major role in funny girl Anna Faris’ new blonde-power comedy, The House Bunny. But it’s her latest role as an awesome-but-snarky bassist in the film The Rocker that could very well make her Hollywood’s latest “It-chick.”

The Rocker is a wet-your-pants hilarious tale of an ousted hair band drummer named Robert “Fish” Fishman (Rainn Wilson). When his 1980s-esque cohorts replace him (and his tragic musical stylings), it sends Fish on a pathetic, decade-long downward spiral into bitterness and mediocrity. Rock bottom comes when he’s forced to move in with his sister’s family.

Fish is soon recruited by his nephew, Matt (Josh Gad) as a temporary drummer for his fledgling band, A.D.D. Although the gig is a disaster, the group decides – reluctantly – to take a chance on Matt’s kooky uncle.

Fish teaches A.D.D.’s emo lead vocalist, Curtis (singer Teddy Geiger) to smile and lighten up, while helping Amelia (Stone) let down her guard to show her vulnerable side and giving Matt some important lessons in coolness. Slowly, the band becomes the hot new thing in the music world –but not without a few roadblocks.

In the end, those crazy kids show Fish a thing or two about himself, leading to a big happy rock ’n’ roll ending. Ah, the beauty of symbiosis...

Adding to the already amusing School of Rock premise is a slew of drop-dead killer talents from the comedy world. “30 Rock”’s Will Arnett, Lonny Ross and Jane Krakowski appear, as do “Saturday Night Live” stars Jason Sudeikis as A.D.D’s MILF-chasing manager and Fred Armisen as a member of Fish’s old band, Vesuvius.

So what attracted Stone to her gutsy character?

“I thought that [Amelia], as a very sarcastic sort of dry person, is the exact opposite of me in real life,” she admits.

That chance to stretch her acting chops included taking up a new skill: playing the bass guitar.

“I learned to play all the songs we’re playing in the movie,” she says. “I’m actually strumming along in all those scenes.”

Aside from rocking out in the fictitious band A.D.D., Stone also got the chance to exercise her sexy in other ways, such as fashion. Her style in the movie puts all of indie rock’s former style mavens (like Sonic Youth’s Kim Gordon and Hole’s Melissa Auf der Maur) to shame. Whether she’s in a tiara and prom dress in the concert scenes or sporting torn fishnets, denim and graphic tees, Stone’s Amelia completely looks the part.

For her role in The Rocker, Stone has a lot of names to draw from for inspiration. She lists the Beatles (her all-time favorite band) and Albert Hammond, Jr. as two of her absolute musts. She also cops to a bit of a thing for the Raconteurs co-frontman Brendan Benson, exclaiming: “I love him!”

But it was acting alongside co-star Rainn Wilson that Stone is especially stoked about.

“He was so cool to actually work with,” she says.

Since a lot of the movie takes place with the band on the road, this gave the cast a chance to really bond.

“We shot a lot of the movie at night,” Stone says. “Most of the scenes you see were shot at, like, three and four in the morning.”

The plot also gets an added kick with the addition of puppy love. As the “girl bassist” on tour with a bunch of guys, Amelia must also come to terms with burgeoning feelings that she has for Curtis.

Stone and Geiger play the part of mutually smitten rockers very well. There were even rumors of a romance between the two young stars.

But Stone is a pro at sparring with the opposite sex. Most of her roles to date have pitted her against Hollywood’s newest crop of comic geniuses. Through it all, she has held her own.

Besides, for the actress, there’s something very touching about the films in which she has appeared, most notably, The Rocker.

About Fish’s transformation from hapless goofball to “Mr. Responsibility,” Stone is super compassionate.

“The second people start to believe in him is the second things sort of work out for him,” she explains.

Still, she does appreciate the opportunities that she’s had lately to work a little estrogen into her career. The House Bunny (also starring A-list spawn Rumer Willis and “American Idol” alum Katharine McPhee) has a mostly female cast. Stone also raves about her upcoming movie, The Ghosts of Girlfriends Past opposite Jennifer Garner and Mean Girls’ Lacey Chabert. The chance to raise her profile not only in The Rocker but in subsequent projects is very thrilling for this multi-talented performer.

“I’ve been unbelievably lucky, starting with Superbad,” she admits.

That’s one way to look at it. Maybe it’s luck, or maybe it’s simply that moviegoers have set their loyal sights on a brand new big screen queen.

The Rocker is currently in theaters.