Who Needs The NFL When You Have USC And UCLA?: Both Teams'Starting Quarterbacks Are Injured, Testing Depth, Strategy. 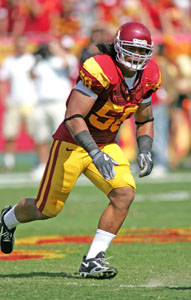 Since 1995, when the Raiders and Rams left Southern California for Oakland and St. Louis, respectively, L.A. football fans have turned to UCLA and USC for their fill of live games. Each season, both teams have delivered excitement, with UCLA appearing in 10 bowl games and USC appearing in nine, including five Rose Bowls and two BCS championship games.

Southern Cal is anchored by strong coaching led by Pete Carroll and depth. Across town, it’s a whole new look for UCLA, who brings in an entire new coaching staff (including former USC assistant Norm Chow).

This season will be a crucial test for both teams, as quarterbacks at both USC and UCLA were bitten by the injury bug. Trojan leader Mark Sanchez is expected to miss the season opener due to a knee injury, while UCLA starter Patrick Cowan is lost for the season with a torn ACL. His backup, Ben Olson, fractured the fifth metatarsal in his right foot but is expected to play after a screw was inserted to speed the healing.

There are more questions than answers this summer, yet when the dust settles, UCLA-USC will be the hottest ticket in town Dec. 6. By then, Southern Cal should have Sanchez at the helm and be in the hunt for its seventh straight first place finish in the PAC-10. In Pasadena, UCLA will struggle early under a new coaching staff and should finish in the middle of the pack with six or seven wins and another regional bowl game appearance.

To look deeper into both teams, here is a scouting report for Los Angeles’ premiere college football programs.

Carroll and his SoCal Trojans will be tested early, with a road game against the Virginia Cavaliers – without starting quarterback Sanchez. Even with 12 returning starters, the team’s depth will truly be tested, as will Carroll’s recruiting ability.

Mitch Mustain will likely get the nod as starter. A transfer from Arkansas, Mustain was 8-0 in his only season as a Razorback (2006). If he plays well, expect Mustain to start again in what may be the biggest game of the 2008 season – USC’s home opener Sept. 13 against Ohio State.

If Mustain performs well both games, an all-out competition may ensue for starting QB honors between him and Sanchez. However, with Sanchez earning starting honors during the spring, expect Mustain to be on a short leash.

Should Southern Cal lose either of its first two games, Sanchez may be the starter by their third game at Oregon State. A bye week between the Virginia and Ohio State games should allow Sanchez to be available in the big Sept. 13 game.

With superstar names like Reggie Bush, LenDale White, Carson Palmer, Matt Leinart and even John David Booty a distant memory, Southern California will unlikely compete for the BCS Championship Game at the Orange Bowl in Miami, Fla. Instead, the Trojans will likely compete for the Rose Bowl once the quarterback issue is resolved.

In the backfield is a platoon of five young, talented running backs with potential, including sophomore tailbacks Joe McKnight and C.J. Gable, junior tailback Stafon Johnson and sophomore fullback Stanley Havili. Johnson and Havili may start in the backfield against Virginia, but it remains to be seen whether they finish there against UCLA in December.

Running routes will be junior receiver Vidal Hazelton, who is probably the most athletic player on offense, and senior receiver Patrick Turner. Mustain and Sanchez will also have junior tight end Anthony McCoy and sophomore receivers Ronald Johnson and David Ausberry as options downfield.

Incoming transfer sophomore Damian Williams from Arkansas should carry his weight on offense, as well.

Similar to UCLA, the Trojans lost almost its entire offensive line in the spring, with four starters leaving the program. Replacing those four starters are Butch Lewis, Zack Heberer, Kristofer O’Dowd and Charles Brown – all of whom are inexperienced yet talented and have no choice but to fill the void.

On the bright side, all four players had at least one start each, due to injuries last season. Yet, they must learn to play together quickly if they want to give an already untested offense a chance to win.

While the offense has potential, SoCal’s defensive line might be the weak link. After losing studs Lawrence Jackson and Sedrick Ellis, attempting to fill their void is senior tackle Fili Moala, defensive end Kyle Moore and a corps of young, promising players like Averell Spicer and Christian Tupou.

The defensive backs, however, are the Trojans’ greatest strength. Senior linebackers Rey Maualuga and Brian Cushing should be All-Americans by the end of the season and should help compensate for any weaknesses on the D-line.

Joe McKnight is expected to make a significant contribution on special teams, where he had more than 500 return yards as a freshman, while senior kicker David Buehler should have another solid season.

Despite a difficult schedule and several inexperienced players vying for key starting positions, Carroll filled his squad with talented blue chip prospects who should perform under pressure.

The Trojans will likely lose one of their three non-conference games (Virginia, Ohio State and Notre Dame), and possibly two conference games. Southern Cal’s biggest threat in conference play is Arizona State. If UCLA can build some late season momentum, they may be able to beat the Trojans in Pasadena Dec. 6.

The PAC-10 is weaker than in recent years, so it is not out of the question for USC to go 9-0 in conference. However, the Trojans, themselves, are not as dominant as years past, so losing one or two PAC-10 games would not be shocking, either.

Head coach Rick Neuheisel makes his return to UCLA and the Pac-10. The former UCLA standout joins his alma mater as the team’s 16th head coach. Neuheisel hopes for a fresh start in Westwood after recruiting scandals dogged him at Colorado and Washington.

Joining him is Norm Chow, the former USC and NFL assistant, who is regarded as an offensive mastermind. In addition, Neuheisel retains the services of defensive coordinator DeWayne Walker, who is widely respected by his peers and players as a solid leader.

Representing Neuheisel on the field is a Top 10 recruiting class, mixed in with some talented veterans.

With injuries to Cowan and Olson, junior college transfer Kevin Craft will likely start under center on opening day. The 6 foot, 5 inch, 210-pound gunner completed 61.3 percent of his passes for 4,231 yards, 44 touchdowns and 10 interceptions at Mount San Antonio College last season. Prior to playing at Mt. SAC, Craft was a redshirt freshman at San Diego State, where he completed 69-of-121 passes for 737 yards for four touchdowns and six interceptions, including completing 20-of-32 passes for 216 yards in his debut against Purdue.

In the backfield, senior Kahlil Bell and redshirt freshman Raymond Carter were both sidelined during the summer due to knee injuries, though Bell is expected to return in time for the opener against Tennessee. The depth chart is solid, with juniors Chane Moline and Christian Ramirez impressing in the spring, and Trevor Theriot returning at fullback. Also, blue chip recruit Milton Knox (Birmingham) is expected to receive some hand-offs.

Helping out will be the offensive line, which lost three players from last year’s squad. Ranked sixth in the conference in rushing yards, eighth in sacks allowed – there’s significant room for improvement in 2008. Senior Micah Reed will start this season at center and junior Micah Kia will hold fort at left tackle.

The Bruin defense, led by fifth-year senior Brigham Harwell and explosive sophomore Brian Price, should prove formidable for the third straight year. Senior Tom Blake and junior Korey Bosworth should have standout seasons in terms of forced fumbles and sacks.

Helping out the D-line will be junior Reggie Carter, who replaces Christian Taylor as middle linebacker. Carter had 62 tackles, including 12 behind the line of scrimmage, last season.

At strong-side is senior linebacker Kyle Bosworth, who had a 19-tackle game in 2007. Opposite Bosworth on weak-side will be one of three players: senior John Hale, junior Joshua Edwards or redshirt freshman Akeem Ayers.

A competition for punter is brewing between blue-chip recruit Jeff Locke and sophomore walk on Danny Rees. Locke is likely to start against Tennessee; he averaged 43.3 yards per punt in the preps last year, including a long of 71 yards.

The Bruins should have at least a .500 season in 2008 and qualify for another regional bowl game. As with most programs under a new head coach, it should be two to three seasons before Neuheisel’s recruits start to pay dividends and challenge USC for college football supremacy in Los Angeles.