Hamlet 2: Loving The Things That You Mock 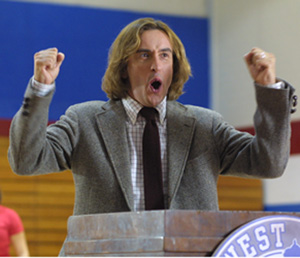 “We just wanted to meet him because we were fans,” Fleming says.

He and Brady thought, “‘He’s never gonna do this’ but we wanted to meet him for drinks. But [Coogan] was really motivated.”

When asked if he added to the film through improvisation, Coogan claims what’s onscreen is barely 10 percent improvised.

“Sometimes the curse of writing a good, well-crafted script is that it flows so comfortably, people think it must be improvised although it wasn’t,” Coogan explains. “But it’s their script, and it remains pretty faithful to what they wrote.”

The biggest change that was almost made to the script after Coogan signed on was adjusting the character from Canadian to British.

“Everything sounds funnier with a British accent,” Brady laughs.

“It’s so elegant and the words sound better. But [Steve] made a great creative point, which is that he never believed a British person would be going through this experience. It’s uniquely North American,” she says, including Canada in the equation.

“We kept talking about it,” Fleming says, “but finally he said, ‘Look, this kind of person, this kind of enthusiasm with no intelligence to back it up, it doesn’t exist in [England]. We don’t have the gumption to do something like this.’”

“Blind optimism is a uniquely American trait,” says Brady, only half joking.

“The fact that he’s so emotionally open and demonstrative is not a British thing,” Coogan explains. “You go to an airport bookstore, and there are all these self help books. As a British person I think, ‘How many books on how-to could you possibly need on how-to make yourself a better human being?’ But this character is someone who would avidly consume those kinds of books. Also I thought I’d quite like to do something that’s not English in America so I don’t end up playing bad guys and butlers.”

What was more important to all three of them was creating the character of Dana Marschz.

“Originally, we started with a delusional character that will never give up and you can throw everything at him,” says Brady “As a function of that, when he finally succeeds in something you’re like ‘Thank God.’”

But, more important, the story was relatable.

“There was always that one teacher, everyone’s had this experience,” says Brady. “The Latin teacher that lived in the classroom was my high school experience. It was just depressing. You always wonder what went on when they went home … except he was home,” she laughs.

“There are two kinds of teachers,” says Fleming, “the ones who are really good at getting the facts across and are just models of behavior, and then there are teachers who are just messes. You can kind of see that their life is crumbling around them, you feel bad for them and they kind of teach you about how hard life can be.”

Not that they’re laughing at the hidden pain of their childhood educators. “You can be mocking,” Coogan says, “but you have to love the things you’re mocking.”