In Search Of A Midnight Kiss: (IFC) 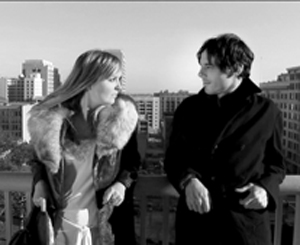 Meet the movie that’s so amazing, it’ll feel like an inside joke you share with a good friend. In Search of a Midnight Kiss stars Scoot McNairy as Wilson, a likable guy that got dumped by his lady after several years together. Instead of getting back out there, Wilson spends his days and nights brooding and fantasizing about his roommate Jacob’s love, Min (Kathleen Luong).

Jacob (played by Brian McGuire) suggests that Wilson obliterate his foul mood by having a Craigslist fling on New Year’s Eve. Reluctant, he agrees and winds up meeting a seemingly bitchy, but ultimately charming actress named Vivian (Sara Simmonds). Together, Wilson and his girlfriend du jour peruse the streets of Los Feliz, Hollywood and downtown Los Angeles getting to know one another.

In Search of a Midnight Kiss is the first indie film in a long while that hasn’t been a blatant attempt to copy the big studio formulas. It’s just a good ol’ fashioned romantic comedy that will do for the boys of Silver Lake and Echo Park what the movie Swingers (1996) did for the guys of Hollywood. It’s funny with sly dialogue, great casting, a clever perspective and could very easily inspire an increase in online hookups.

In Search of a Midnight Kiss releases in select theaters Aug. 22.