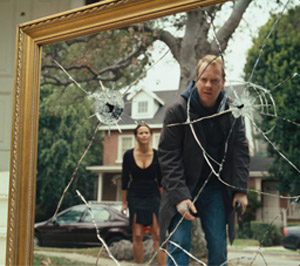 Just when you thought Hollywood was over its post-The Ring infatuation with Asian-inspired horror comes what could arguably be the worst of the imitator copycats. Writer/director Alexandre Aja, who helmed the cult hit High Tension as well as The Hills Have Eyes remake, shows us exactly what happens when a French director tries to apply his hand to a Korean story. Unfortunately, the result is not pretty.

Kiefer Sutherland (“24”) stars as a troubled detective laid off after an incident at work. He gets a job as the night watchman for a burnt down mall, which may or may not possess some very angry demons within the myriad of mirrors within its walls.

Aja, whose previous efforts were grounded in disturbing, reality-based situations, disappoints with his first effort at supernatural horror. The disturbing nihilism that was previously exhibited by Aja, as well as many other recent French horror films, is absent, and what’s left is exactly what you might imagine it would be – a French director trying really hard to craft an Asian ghost tale.

Sutherland gives a commendable performance given the highly illogical and absurd plot that involves a hidden world within mirrors. The film itself starts off on a high note, sustaining a highly creepy and mysterious vibe, but gradually falls apart as the story unfolds.

Mirrors is currently in theaters.