Randy 'The Natural' Couture: The Ultimate Fighter Breaks Out Of His Cage 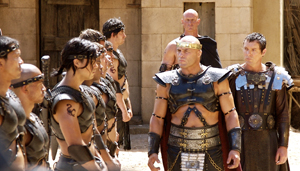 Randy “The Natural” Couture seems to be stepping into many different roles and none is more dramatic than his turn at acting. His autobiography was just released, and he has been working hard to license Xtreme Couture MMA training centers around the nation, but unable to fight again on his own terms (he had a recent tiff with UFC President Dana White), acting might start to eat up more of his time.

Couture’s first starring role comes as Sargon, the villain of the newly released, straight-to-DVD prequel, The Scorpion King 2: Rise of a Warrior. Naturally, his presence in the film is drawing comparisons to the first film’s star, Dwayne “The Rock” Johnson, but Couture shrugs them off.

“The Rock made such an unforgettable impression in The Scorpion King that I don’t think anyone will forget him in that role. I get to play a different kind of role in this film, King Sargon. I hope audiences will see him as brutal and menacing, as that is his personality.”

It seems a tall task for a man known in the world of MMA as a “nice guy,” but Couture relishes the challenge.

“For me, the chance to play a character completely different than how I am in real life was an experience I will always remember,” says Couture. “Whether you’re competing in the cage or acting on a set, it’s using your dedication, discipline and hard work to do the best job possible.”

The Scorpion King 2: Rise of a Warrior is currently available.