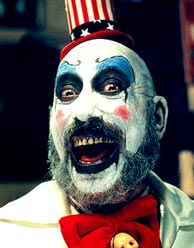 Take one part Texas Chainsaw Massacre, one part Last House on the Left and one part Dario Argento film. Put in a combine and set to mutilate, and you’ll get this groovy gorefest.

We know this isn’t your big brother’s horror flick from the get-go. The generation that rented those old video copies of Color Me Blood Red from mom and pop stores will love Corpses. Scream teens weaned on Blockbuster titles won’t understand the mood, the mis-en-scene or the macabre nature of this beast.

Writer/director Rob Zombie gets the fun and games rolling with two slacker couples on a country road on a rainy night. Before you can say Motel Hell, they’re at Captain Spaulding’s roadside BBQ roost. Spaulding (Spider Baby legend Sid Haig) is a maniacal fuck in an Uncle Sam get-up (never accuse Zombie of being unpatriotic) who takes our victims on a serial killer ride. When Jerry (Chris Hardwicke) inquires about backwoods legend Dr. Satan, these too-old-to-be-teens are soon on the back roads with a flat. A hitchhiker (Sheri Moon) leads them to what they think is safety, but in reality is her killer family’s den. The obligatory slayings follow, but with the same grim humor that mid-‘70s grindhouse goodies cranked out like liver sausage.

Many supposed horror buffs have already written off Corpses as a tame copycat, but I disagree. Homage is the sincerest form of flattery, and Zombie knows his source material almost too well. The pacing lags, but the soundtrack grooves, and the gore is galore at the end, especially in a surgery scene. What true fans of Wes Craven and Tobe Hooper hootfests might not recall is it isn’t what you see onscreen——it’s the overall mood and what you see off-screen that mattered. Doesn’t anyone remember how half of those films never completely paid off (think The Serpent and the Rainbow, which is feted here)?

Haig and other horror hall of famers like Tom Towles, Karen Black and Bill Moseley have a blast reliving a time when not all was perfect at the drive-in, but there was some gristle hanging off the meat, so to speak.

Those looking for a nice, fat-free repast shouldn’t stop at Captain Spaulding’s or see Corpses. Zombie would prefer you get the lo-cal I Know What You Did Last Summer combo platter. And he’ll be glad you did.