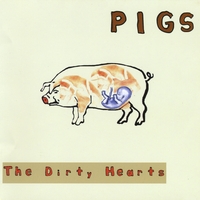 It’s too bad that Pigs wasn’t around back when the movie High Fidelity was being shot. Album opener “Record Store” is filled with leave-me-alone-I’m-digging-my-music attitude, and it would have made a perfect vehicle for the movie’s Jack Black to go crazy to.

On “Alone” singer Frankie Medina growls that he’s “Not so glad I met ya” and on “Cold Feet” he flippantly offers up his chilly peds as her reason to leave. This might all seem like nothing special, but consider that Medina has his band channeling the Stooges the entire time and you basically end up with the best album that Iggy Pop never made.

There are a couple of departures in style; “Where I Come From” is surf-y, and “Pigs” has a heavy dose of Athens-style campus-rock involved. “No Strings Attached” is the best written and best performed number here; it’s so good the Dirty Hearts reprise the song in Spanish as “Sin Ataduras.”